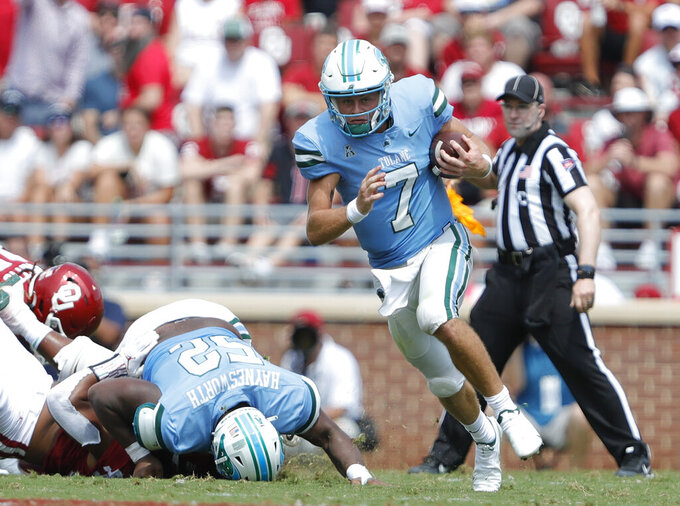 BIRMINGHAM, Ala. (AP) — Tulane plans to play its first on-campus home game of this season against UAB on Sept. 25, nearly a month after the program was displaced by Hurricane Ida, university officials announced Monday.

The team's return coincides with the planned return to campus of the general student body.

“The Green Wave football team’s return to Yulman Stadium puts an exclamation point on the fact that Tulane is back in business,” Tulane President Michael Fitts said. “We are resuming normal operations, including in-person classes, hands-on research and on-site work.”

Hurricane Ida struck southeast Louisiana on Aug. 29, causing widespread damage and knocking out power to much of the New Orleans area for nearly a week.

Since then, Tulane has been practicing in Birmingham and also had to relocate its first two games of the season, which were originally scheduled at home. Instead, the Green Wave opened with a 40-35 loss at No. 3 Oklahoma on Sept. 4 and then routed Morgan State, 69-20, in a quasi home game at Birmingham's Legion Field last weekend.

The Wave plays next at Mississippi on Saturday before preparing to host UAB in what was supposed to be its third game of the season at Yulman Stadium.

“It has taken a remarkable effort by so many over the past month to get the City of New Orleans, and our campus, back up and running,” Tulane Athletic Director Troy Dannen said.

Dannen also said he was grateful to the people of Birmingham for making their community “a wonderful home away from home for the 300 student-athletes and staff who have been relocated since Hurricane Ida.”

Tulane officials said that because the next home game will fall on the same weekend in which students are permitted to move back into university housing, parking for that game, and tailgating, will not be permitted on campus. The university plans to announce alternate parking arrangements in coming days.

Meanwhile, all fans attending the next Tulane home game must provide proof of vaccination or a negative COVID-19 test in order to enter the stadium.