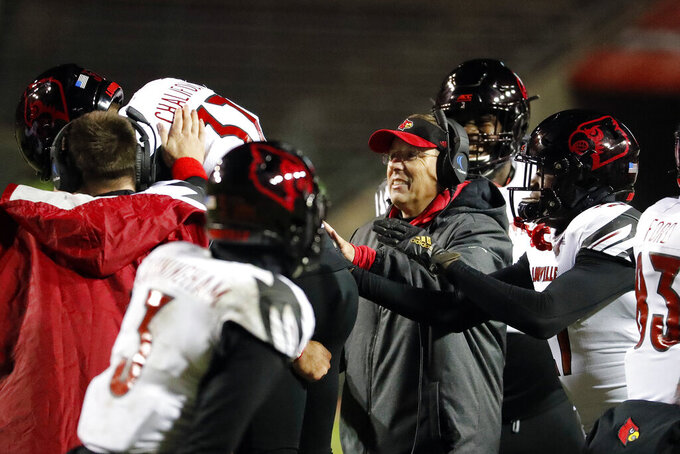 Louisville head coach Scott Satterfield, center, waits to congratulate Ryan Chalifoux (37) on his successful pass for a fake field goal against North Carolina State during the second half of an NCAA college football game in Raleigh, N.C., Saturday, Nov. 16, 2019. (AP Photo/Karl B DeBlaker)

LOUISVILLE, Ky. (AP) — Bowl-bound Louisville would like nothing more than to add another victory to its turnaround season when the Cardinals play host to Syracuse.

If the Cardinals can get the win it would be the final blow to Syracuse’s postseason hopes.

The schools’ fortunes have reversed since last fall, when the Orange shellacked the freefalling Cardinals 54-23 on their way to a 10-win finish and bowl victory. Now Louisville (6-4, 4-3 Atlantic Coast Conference) has a chance for nine victories and Syracuse (4-6, 1-5) is in a must-win situation.

“We know we will get their best shot,” Satterfield said of the Orange. “Coach (Dino) Babers has done a great job with that program. I know those kids have a lot of fight. We have to come out here mentally saying we have to play our best game.

“That’s where we want to be this weekend.”

After being blown out at Miami, Louisville appears to have corrected things with big passing plays that helped beat North Carolina State 34-20 last weekend.

Sophomore quarterback Micale Cunningham passed for 242 yards and a career-best four touchdowns. The Cardinals were outgained 377-326 by the Wolfpack but forced three takeaways, scoring 13 points off two turnovers.

Syracuse meanwhile halted a four-game slide and earned its first ACC win in six tries with a 49-6 road pasting of Duke. The Orange were opportunistic as well, scoring 21 points off turnovers including Andre Cisco’s 48-yard interception return for a TD.

Impressive as that was following a 58-27 home loss to Boston College, the Orange needs to win their road finale to maintain bowl hopes. That won’t be easy considering they are 2-5 in Louisville with four consecutive losses, but they enter with momentum from a much-needed victory.

“I feel like we played a complete game, which allowed us to come out with a big win,” Cisco said. “We feel rejuvenated.”

Some other things to watch as Syracuse visits Louisville:

Syracuse has not thrown an interception in 169 pass attempts, including 146 by starting QB Tommy DeVito. That’s the third-longest active streak in FBS — behind Liberty’s Stephen Calvert (281) and Georgia Southern’s Shai Werts (192).

“I don’t pay too much attention to that,” said the redshirt sophomore, who has completed 69% of his passes for 2,180 yards and 17 TDs. “I’m just really focused on the wins and losses, but it’s just a testament to the rest of the team. Our passing game has had a lot of ups and downs. Hopefully, we can keep that streak of being on the upside of it.”

Before kickoff the Cardinals will bid farewell to 26 seniors, including six graduate transfers, playing their home finales on Saturday. With 26 juniors on the roster, next year’s ceremony could be just as lengthy.

The Orange’s three turnovers at Duke gave them 19 this season for a 0.7 margin that ranks third in the ACC and 16th nationally. Their turnover total ranks second in the conference and 19th overall.

There has not been a lead change in all but one of Syracuse’s 10 games this season. The exception was against Boston College, which the Eagles handily won after five lead changes in the first half. The team that has scored first has won every game.