Talk of Texas: Are Longhorns back after big win over OU? 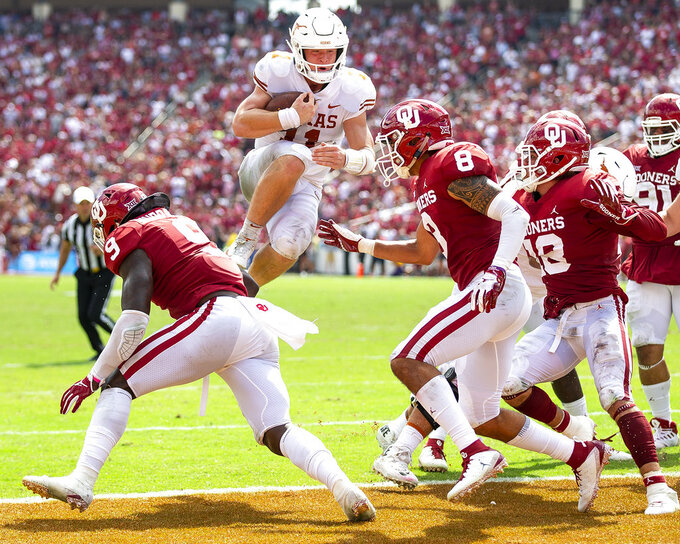 Texas quarterback Sam Ehlinger (11) leaps into the end zone against Texas during an NCAA college football game at the Cotton Bowl, Saturday, Oct. 6, 2018, in Dallas. (Nick Wagner/Austin American-Statesman via AP) 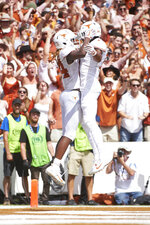 DALLAS (AP) — There was a long pause by coach Tom Herman while considering the obvious questions after Texas extended its winning streak to five games with an impressive victory over three-time defending Big 12 champion Oklahoma in the Red River rivalry.

Are the Longhorns, now a top-10 team again, really back? Ready to be a Big 12 powerhouse again? A playoff contender?

"It's irrelevant to us I think is probably the best way to put it. We're not so concerned about where people think Texas is," Herman finally said in the wake of the postgame celebration. "The people in that locker room, the coaches and players, are the people whose opinions matter the most to us. ... Those are the people that we have to answer to on a daily basis."

These Longhorns (5-1, 3-0 Big 12) have won three games over Top 25 teams since a season-opening loss at Maryland. They mostly bullied their way past Oklahoma except for a Kyler Murray-led rally in the fourth quarter that necessitated Texas true freshman Cameron Dicker's 40-yard field goal with nine seconds left to win 48-45.

Texas moved up 10 spots to No. 9 in the new AP Top 25 poll on Sunday, the first time the Horns have been a top 10 team after September since 2009 — when they won their last Big 12 title and were the national runner-up.

"It would be foolish for me to not understand the big picture," said Herman, who later recoiled a bit at even the mention of the College Football Playoff.

"We've taken some really big steps here the last few weeks. I'm not going to deny that. I'm not going to downplay that for these players," he said. "They have some taken very important steps in this program's development and its progress."

Oklahoma (5-1, 2-1), a playoff team two of the last three seasons, slipped four spots to 11th in the AP poll. The Sooners have won 27 of their last 30 regular-season Big 12 games — two of those losses are to Texas.

"We have been as good as anybody in the country the last three years of responding to the very few losses we've had," Oklahoma coach Lincoln Riley said. "We've got a track record right there that you could put up against team in the country, and that's absolutely what we expect to do again."

The Sooners have a week off before they return to the Dallas-Fort Worth area to play TCU on Oct. 20.

The highest-ranked Big 12 team, and the league's only remaining undefeated, is No. 6 West Virginia (5-0, 3-0). The Mountaineers go to Texas on Nov. 3, and host the Sooners the day after Thanksgiving, and a week before the Big 12 championship game.

Texas and Oklahoma both had more than 500 total yards Saturday and combined for the most points in their 113-game series that dates back to 1900, and has been part of the State Fair of Texas since 1929.

"It hurts and I am disappointed," said Murray, the Major League Baseball prospect who might have played his final game against the Longhorns — unless there is a Big 12 championship rematch.

Ehlinger started as a freshman against the Sooners. Now he has a win against the Sooners, and is the first Texas quarterback since Colt McCoy in 2007 to start a season with six consecutive 200-yard passing games. Ehlinger hasn't thrown an interception in the past five games, his streak of 163 consecutive passes without a pick now a school record.

"The guy prepares like a pro," Herman said. "The guy has played in some big ball games this year and he's played really well in those games. I don't think anybody was surprised to see him do what he did."