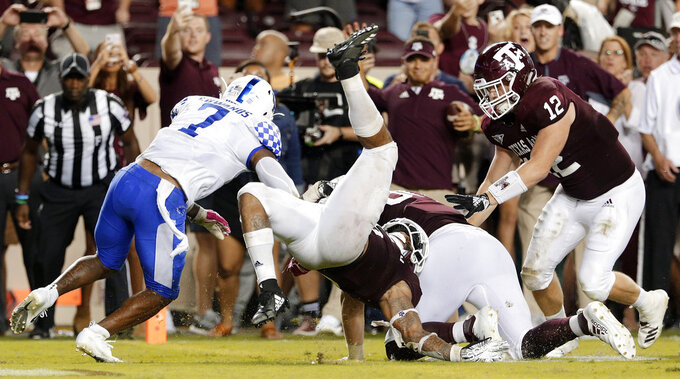 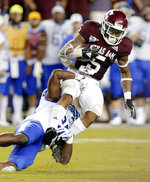 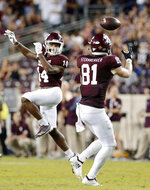 COLLEGE STATION, Texas (AP) — Jimbo Fisher has his first signature victory at Texas A&M. It took a little extra time to earn it.

Trayveon Williams twisted into the end zone on a 10-yard run in overtime to give the Aggies a wild 20-14 victory over No. 13 Kentucky on Saturday night.

Kentucky's Miles Butler missed a 43-yard field goal to start the extra period, the ball bouncing back off the crossbar, and the Aggies capitalized with Williams' touchdown run four plays later to hand the Wildcats their first loss of the season.

"Heck of a football game," said Fisher, the former Florida State coach in his first year with the Aggies. "We just kept playing and going on to the next play. And our defense was outstanding."

The Aggies turned in one of their top plays of the night when defensive end Kingsley Keke sacked quarterback Terry Wilson on third-and-2 in overtime for a loss of eight yards. That created a field-goal attempt that was just out of Butler's reach.

"The sack was huge in the game," Fisher said. "Another yard (closer), and the field goal would have been good."

The tide appeared to turn in the Wildcats' favor early in the fourth quarter, when Kellen Mond's pass intended for Hezekiah Jones popped off Jones' hands and into the waiting arms of safety Darius West, who returned the ball 19 yards to the Kentucky 49. The drive ended in a punt, however, and a 43-yard punt return by Roshauud Paul to the Kentucky 48-yard line with 11:07 left in the game.

Mond tried throwing underneath to Camron Buckley. The ball glanced off of Buckley's hands and right into those of tight end Jace Sternberger, who scooted 46 yards up the middle for a touchdown and a 14-7 lead for the Aggies.

Texas A&M (4-2, 2-1 Southeastern Conference) appeared to be in control and was trying to drain the clock when Mond fumbled. West was in the right place again, scooping up the ball and returning it 40 yards for a touchdown to tie it at 14 with 4:17 remaining but the game went to OT.

The Wildcats (5-1, 3-1) were trying to improve to 6-0 for the first time since 1950, but their offense was held mostly in check. In an oddity, the Wildcats didn't have an offensive snap in Texas A&M territory until overtime. Wilson's big play was a 54-yard touchdown pass to Lynn Bowden Jr. and the other score came on the West fumble return.

"I wish we could have finished it off and gotten that victory, but I am proud of our team," Kentucky coach Mark Stoops said.

The Aggies snapped a six-game losing streak to Associated Press Top 25 opponents, including losses this season to top-ranked Alabama and then-No. 2 Clemson.

The Aggies were playing their lone home game in October, before hitting the road for three consecutive SEC games.

"This is another step forward, but we're never satisfied," Mond said.

Texas A&M: The Aggies' defense smothered Benny Snell (13 carries for 60 yards), and was opportunistic in the fourth quarter and overtime. Snell entered the game leading the SEC with 133 rushing yards per game.

Kentucky: A charmed season took a hit for the Wildcats, but Kentucky could stay in the mix in the SEC East — with the Nov. 3 home game against Georgia carrying huge ramifications.

The Wildcats are sure to drop at least a few spots following the loss, while the Aggies might re-enter the polls following a brief appearance in mid-September at No. 22.

The Wildcats were held to 178 total yards and 70 rushing yards, easily their lowest totals of the season. Texas A&M's Trayveon Williams outgained Kentucky by himself, with 210 all-purpose yards (138 rushing, 72 receiving).

"We pride ourselves on stopping the run, and that's what we're going to do from now on, every game." — Texas A&M linebacker Tyrel Dodson.

Braden Mann's punt of 82 yards in the second quarter was the Aggies' longest since Bobby Goff's boot of 86 yards in 1944, and third longest in program history. Mann's punt also was the longest in Football Bowl Subdivision action so far this season.