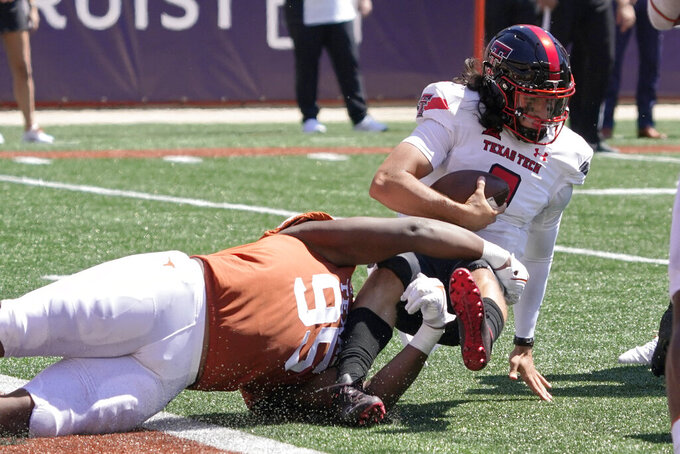 Henry Colombi will get his first start of the season in place of Tyler Shough, an Oregon transfer who broke his left collarbone last week and is out at least six weeks. Colombi threw for 324 yards, including touchdown passes of 40, 69 and 75 yards, in Shough's place in a lopsided loss at Texas.

West Virginia is all too familiar with the mobile Colombi, whose first career start after replacing the injured Alan Bowman in 2020 was a success at home against the Mountaineers.

“I think that helps and I think that will give Henry some confidence,” Texas Tech coach Matt Wells said. “Henry’s grown in his knowledge in this offense since the spring. I think he is a patient guy in the pocket. But the thing about Henry is he'll pull it down and run it, and just knowing what to do with the ball when something’s not there, taking a sack, throwing the ball away. Those are things that you see progression with Henry being more mature. And that’s what I hope will continue here for a while.”

Colombi completed nearly 80 percent of his passes, rushed for 40 yards and had a touchdown both running and throwing in the teams' last meeting. Texas Tech squeaked out a 34-27 win when cornerback Zech McPhearson returned a fumble 56 yards for a fourth-quarter touchdown.

The Mountaineers most remember Colombi's ability to befuddle the defense with his legs. Coach Neal Brown said having the experience of facing Colombi once before was good, but “I don’t know if it’ll help us when he starts scrambling around. That’s where we needed help last year.”

One team won't have to worry about a second straight loss.

“We try not to get too high with the highs or too lows with the lows, so we’re focused on moving on right now and looking forward to the opportunity this Saturday to kind of get the stink off of us,” Schooler said.

West Virginia is coming off a 16-13 loss at No. 6 Oklahoma. The Mountaineers have managed only one field goal in the second half in all three games against Power Five opponents this season.

“You have to know where he is, you have to figure out where he is and how they plan on using him,” said West Virginia defensive coordinator Jordan Lesley. “You’ve seen how they’ve used him up to this point, so you got to game plan for that.”

UP AND DOWN JAMES

West Virginia wide receiver Sam James has been both sensational and unfortunate against Texas Tech.

Two years ago James set career highs with 14 receptions for 223 yards against the Red Raiders.

He fumbled after making a catch last year when he was hit by Texas Tech’s Jacob Morganstern. McPhearson was there to pick the ball up and run 56 yards untouched into the end zone for the deciding points.

James has half of West Virginia's six touchdown receptions this season.

The No. 90 worn by College Football Hall of Fame linebacker Daryl Talley is being retired during Saturday‘s game. Talley was West Virginia’s all-time leading tackler when he left in 1982. Current defensive lineman Akheem Mesidor will be the final player to wear the number, the fourth to be retired from the football team in school history.