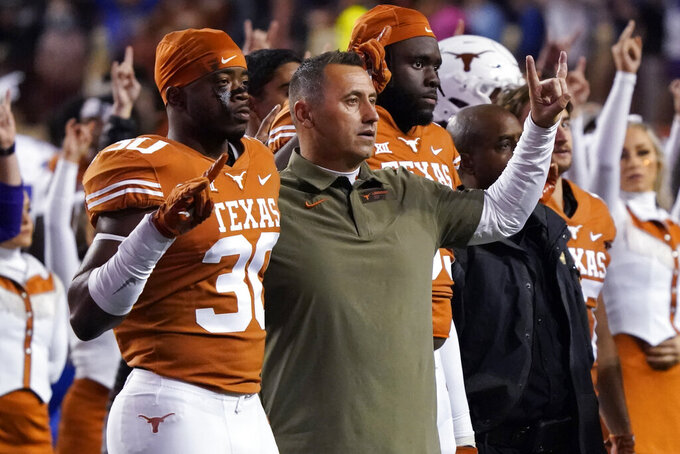 MORGANTOWN, W.Va. (AP) — Disappointing football seasons for Texas and West Virginia have come down to this: Win twice or stay home.

Both need two victories to at least make something out of their respective messes by becoming bowl eligible.

One of those goals will end when they meet on Saturday.

Perhaps the worst part is a last-place finish for one of them could come into play if Kansas can win one more game.

Patience among fans has worn thin, both in Austin, Texas, and throughout West Virginia.

After starting the season 4-1 under first-year coach Steve Sarkisian, Texas has lost five straight, its longest since dropping eight in a row in 1956. The latest loss was a 57-56 overtime setback at home to Kansas.

“The reality of it is, things takes time," Sarkisian said. “I’m probably as impatient as anybody else. We all want it to happen quicker rather than later. And so that’s the race, right? You talk to coaches, it’s a marathon, not a sprint. But I’m of the adage, why can’t you sprint a marathon?”

Count running back Roschon Johnson among the athletes who are confident in the coaching staff.

“I feel like since they’ve gotten here, they’ve preached the right mindset amongst all the players,” Johnson said. “It’s just a matter of us buying in and executing what they set out for us to do."

West Virginia has been hot and cold on the field, too. The Mountaineers have beaten two ranked teams this season. A three-game losing streak was followed by a two-game winning streak, then a current two-game skid filled with mistakes.

“It's not too late to play good football,” Brown said. “We've played good football in spots this year but we haven't been consistent. Our lack of consistency is extremely, extremely frustrating."

West Virginia is last in the Big 12 in rushing offense. Texas allows 203 yards on the ground per game. West Virginia running back Leddie Brown has three 100-yard efforts this season and the Mountaineers have won all of those games.

Texas will be without running back Bijan Robinson, who dislocated an elbow last week and will miss the rest of the season. Robinson was third in the Big 12 with 1,127 rushing yards and scored 15 touchdowns.

The Longhorns will lean on Johnson, who has proven to be a tough, tackle-breaking rusher over his career but has struggled with turf toe problems this season. He has 313 yards with three touchdowns on 50 attempts this season. The converted quarterback rushed for 121 yards at West Virginia in 2019.

Wide receiver Xavier Worthy has set the Texas freshman season record with 11 touchdown catches and instantly became the Longhorns’ most important offensive player when Robinson got hurt. Worthy caught three TDs against Kansas to break the previous freshman mark of eight set by Roy Williams in 2000. Worthy is tied with four others for the national lead in receiving TDs. His 831 yards leads put him within reach of being just the ninth Longhorns receiver to reach 1,000 in a season.

Texas has led each of the five consecutive losses in the second half or in overtime. The Kansas game was the first time in a month the Longhorns hadn’t been outscored in the second half. This time, they were the ones rallying from 21 down to take the lead, only to lose on a 2-point conversion in overtime.

Not that anyone needs a reminder of glory days past, but West Virginia will hold a pregame ceremony to honor the 2011 team that beat Clemson 70-33 in the Orange Bowl.