UCLA looks to bounce back in season finale at Cal 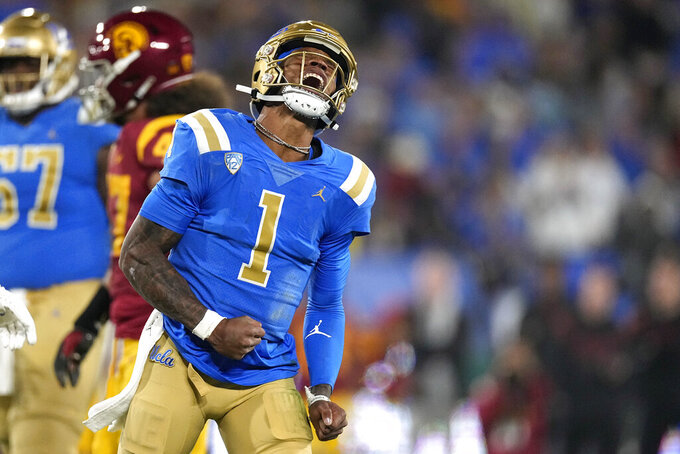 UCLA quarterback Dorian Thompson-Robinson celebrates after running the ball for a first down during the first half of an NCAA college football game against Southern California Saturday, Nov. 19, 2022, in Pasadena, Calif. (AP Photo/Mark J. Terrill)

“That’s the one you want every year, that’s our championship, you can call it,” quarterback Dorian Thompson-Robinson said about the 48-45 loss to the Trojans.

“So obviously it hurts, but we want to end this thing off on the right foot. We have 20-something seniors on this team, guys that I played here with forever, so trying to send those guys out on the right foot.”

UCLA had almost all of its goals in reach when the Bruins had a chance to drive for the winning score against USC.

Now it's only smaller milestones. With a win against Cal and in a bowl game, the Bruins can tie the school record for wins in a season with 10. They have won 10 games nine times, having last done it in 2014.

But the immediate focus is on the game Friday.

“We talk about Cal because 10 doesn’t mean anything unless you get to nine, so we never get ahead of ourselves or talk about anything longer than that,” coach Chip Kelly said. “Our attention is on Cal.”

The Golden Bears have little to play for besides pride after a six-game losing streak derailed a season that had some promise early.

Cal ended that skid by rallying in the fourth quarter to beat Stanford in the Big Game last week, and the Bears want to follow that up with a win against another of their in-state rivals.

“They can use the emotion to catapult themselves into this week which is just what they have done,” coach Justin Wilcox said. “We have a great deal of respect for UCLA. A lot of our kids come from down there. ... It's the next opportunity and it's a great opportunity.”

Thompson-Robinson had his thumb taped up in practice this week after hurting it in the loss to USC. But the Bruins have no doubt that Thompson-Robinson will be able to play through it on Friday.

“That’s Dorian, he’s a warrior and I’m not sure what can stop Dorian — I haven’t seen it yet,” Kelly said. “He’s just a tough sucker, so I’m glad he’s on our side.”

Bears running back Jaydn Ott needs one more big performance to finish off his freshman season with a 1,000-yard campaign. Ott has rushed for 842 yards this season, fifth among all freshmen. The last Cal player to rush for at least 1,000 yards in a season was Patrick Laird, who had 1,127 yards as a junior in 2017.

Ott needs 158 rushing yards on Friday against UCLA to reach 1,000 for the season — a total achieved 19 times by 16 different Cal players. The Bears’ most recent 1,000-yard rusher was Patrick Laird, who began his career as a walk-on and by his junior season in 2017 ran for 1,127 yards.

“The cool thing about Zach is, I don’t know if I’ve ever been around a more consistent player,” Kelly said. “His attitude and mindset is the same exact thing. He never has a bad day. Every day, you can count on him. It’s like the sun coming up in Southern California.”

Cal is honoring its longtime announcer Joe Starkey, who will call his final game after 48 seasons in the booth. Starkey has called 549 of Cal's last 556 games since taking the job in 1975 with his most memorable moment coming 40 years ago when he exclaimed “the band is out on the field!” during an improbable, game-ending kick return touchdown against Stanford that featured five laterals and is simply known as “The Play.”

Starkey also coined the phrase “What a bonanza!” that he uses after big plays.