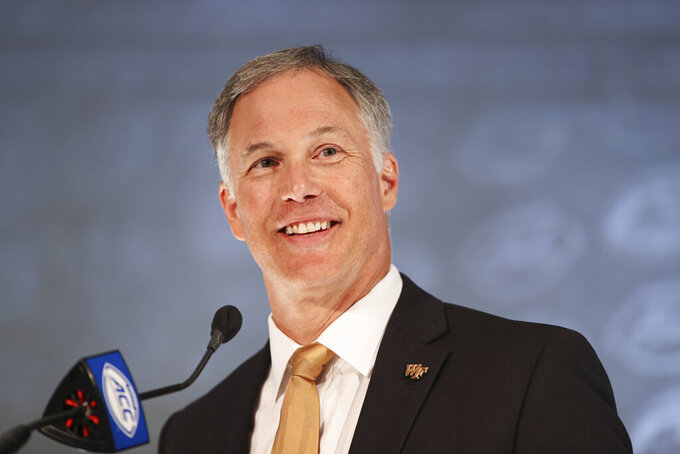 Wake Forest has turned years of steady winning into a potential breakthrough moment in the Atlantic Coast Conference, while Pittsburgh has made a leap behind the rise of quarterback Kenny Pickett.

They headline Wednesday's list of midseason honorees in the league from The Associated Press.

With his 16th-ranked Demon Deacons unbeaten, Dave Clawson is the unanimous choice as the ACC’s top coach through the season’s first half in voting by AP writers covering league teams. Pickett was voted the league’s top offensive player thus far for the 23rd-ranked Panthers.

In addition, Wake Forest was picked as the most surprising team so far, with Pittsburgh as runner-up.

Now in his eighth year, Clawson has led the Demon Deacons to five straight bowl games with a plan built on developing ready-to-contribute veterans over time rather than just annually plugging in five-star recruits. They returned all but a handful of starters, creating an experienced and deeper roster that generally avoids self-inflicted damage.

“The good thing about having depth is there’s more internal competition,” Clawson said. “And then ... guys have got to practice harder because they if don’t practice harder, they’re not going to play. So these are actually the easier years to coach."

Maybe so, but Clawson has made the right moves with a team picked to finish fifth in the seven-team Atlantic Division.

The Demon Deacons are 6-0 for the first time since 1944 – nine years before the ACC was formed – and 4-0 in ACC play for the first time ever. They’re also the league’s highest-ranked team in an unusually wide-open league race featuring the Panthers and No. 18 North Carolina State.

A fifth-year senior, Pickett has stirred Heisman Trophy buzz with rising NFL draft stock, ranking eighth in the Bowl Subdivision ranks by throwing for 322.3 yards per game and fourth with 21 touchdown throws while throwing just one interception for the Panthers (5-1, 2-0).

“He’s made himself a lot of money coming back, I can tell you that,” Pitt coach Pat Narduzzi said after Pickett’s four-TD game at Georgia Tech.

“He’s just a smart football player. It takes time to get that where you want it to be. He’s put the work in and he deserves what he’s getting right now.”

As the league pushes into the schedule's second half, here are some of the ACC's best, worst and most notable developments after voting by AP writers:

Virginia Tech defensive back Jermaine Waller is tied for the FBS lead with four interceptions. The fourth-year junior has helped the Hokies rank third in the league in passing-efficiency defense.

Syracuse defensive back Darian “Duce” Chestnut has become an immediate contributor. The defensive back has two interceptions and 19 tackles while starting all seven games this year.

The surprise with Virginia quarterback Brennan Armstrong has been just how much he has elevated his game.

The fourth-year junior ranks second in FBS by throwing for 403.4 yards per game, including a program-record 554 yards – most by any FBS player this year -- in a loss at North Carolina. By comparison, Armstrong averaged 235.2 yards passing last year.

North Carolina is the top choice in a year with multiple options in six-time reigning league champion Clemson and Miami, with all three unranked.

Mack Brown's Tar Heels (4-3, 3-3) opened with a No. 10 ranking as the Coastal Division favorite with the return of star quarterback Sam Howell and a veteran offensive line. But they’ve struggled to protect Howell and overcome the losses of big-play threats Javonte Williams, Michael Carter and Dyami Brown to the NFL, falling out of the poll before October.

The pressure is growing on Miami’s Manny Diaz and Virginia Tech’s Justin Fuente.

The Hurricanes (2-4, 0-2) were ranked No. 14 in the preseason and projected as the top Coastal challenger to UNC. But Miami has its first 2-4 start since 1997 when the program faced NCAA probation and scholarship limitations. And Diaz sits at 16-14 in three seasons with the Hurricanes.

Diaz’s job only grew tougher with a season-ending shoulder injury for D’Eriq King. The sixth-year dual-threat quarterback was hurt in the second half of a Week 3 loss to Michigan State, with the team holding out hope until last week that King could recover through rehabilitation instead of surgery.