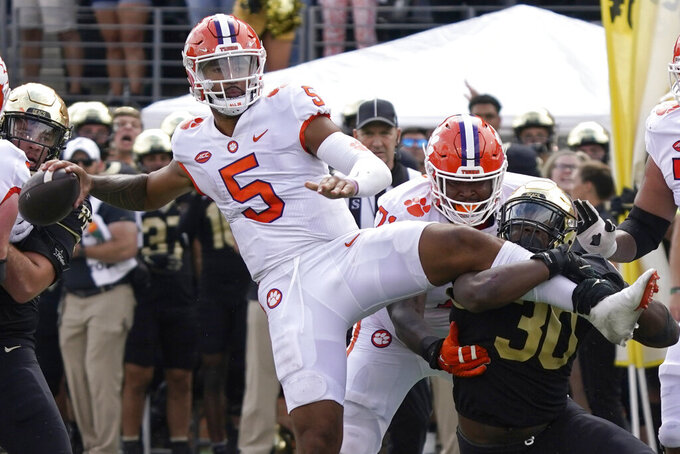 What's being called the biggest game in North Carolina State history and Florida State's first game in four years as an AP Top 25 member have put the Atlantic Coast Conference in the national spotlight Saturday.

Whether the games are played as scheduled depends on the path Hurricane Ian takes.

No. 23 Florida State has ridden that blocked extra point at the end of the game against LSU and wins over Louisville and Boston College into the rankings for the first time since the 2018 preseason. The Seminoles host a No. 22 Wake Forest team in need of a bounce-back after losing to Clemson.

The Southeastern Conference features two Top 25 matchups: No. 2 Alabama at No. 20 Arkansas and No. 7 Kentucky at No. 14 Mississippi. No. 9 Oklahoma State visits No. 16 Baylor in the Big 12's only game involving ranked teams.

No. 10 North Carolina State at No. 5 Clemson

This is the first top-10 matchup in the 90-game series history, and the winner gets a leg up in the Atlantic Division race and a tally mark on its College Football Playoff check sheet.

NC State has been workmanlike through four games and ACC preseason player of the year Devin Leary has been good. The QB needs to be closer to great this week.

Clemson's DJ Uiagalelei is coming off his best game in a 51-45 double-overtime win over Wake Forest. On top of having a hot quarterback, the Tigers have motivation. Their two-overtime loss to the Wolfpack last year ended an eight-game win streak in the series and all but knocked them out of the CFP race. Also, NC State coach Dave Doeren lit a postgame victory cigar — something Clemson's players definitely haven't forgotten.

Sam Hartman of No. 22 Wake Forest is a long shot, to be sure, but he could enter the conversation with a performance at Florida State like he had against Clemson.

Hartman has a 13-2 TD-to-interception ratio, and he'll be going against the ACC's top pass defense and a very capable Seminoles pass rush.

Hartman averaged an impressive 11.6 yards per pass attempt while throwing for 337 yards and an ACC-record six touchdowns against Clemson, which has its own Heisman sleeper in Uiagalelei.

17 — Grayson McCall's consecutive games with at least one touchdown pass for Coastal Carolina.

48-3 — Middle Tennessee State's first-quarter scoring margin through four games. The Blue Raiders led Miami 17-3 after the opening quarter on its way to a 45-31 win last week.

The beatdown the Sooners put on Nebraska looked like fool's gold after Adrian Martinez and Kansas State rolled them last week in Norman. Whether that performance was an aberration will be known when they visit a TCU team they've beaten eight straight times.

The Horned Frogs are using this as a measuring stick game after beating winless Colorado, FCS team Tarleton and SMU.

Also: No. 15 Washington at UCLA on Friday, Iowa State at undefeated Kansas and No. 4 Michigan at Iowa.

Stanford's David Shaw was among the hottest coaches in the nation six years ago when he led the Cardinal to the Pac-12 championship game for the fourth time in six seasons.

Times are tough on The Farm nowadays. The Cardinal have lost nine straight against Bowl Subdivision opponents. They have one takeaway vs. 11 turnovers in their three games. The offensive line has given up the most sacks in the Pac-12.

Shaw posted winning records each of his first eight years, including five double-digit win seasons, but going 12-21 since 2019 puts him on the clock.