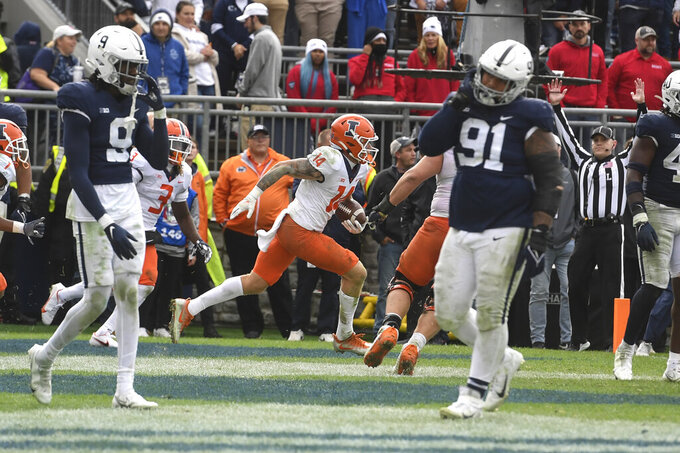 STATE COLLEGE, Pa. (AP) — Dvon Ellies and Coziah Izzard starred for crosstown Maryland high school teams not long ago. They recently learned they can do more together.

The Penn State defensive tackles have been asked to play bigger roles for the No. 23 Nittany Lions. Since hulking tackle PJ Mustipher suffered a season-ending leg injury at Iowa on Oct. 9, the two former standout recruits have helped Penn State rediscover some of the nastiness that the 330-pound Mustipher provided up front.

“We went through some growing pains, especially without ‘P,'” Ellies said.

After a bad game against Illinois where the Nittany Lions — in their first full game without Mustipher — allowed 357 rushing yards, the rebooted defense held Ohio State’s top-ranked offense to 161.

It was far from perfect, but the effort helped Penn State hang in the game and build confidence with Maryland and shifty quarterback Taulia Tagovailoa up next.

Considering the Nittany Lions had to replace all four defensive line starters from a year ago, and had less players to do it with, both Ellies and Izzard have been learning on the fly.

Arnold Ebiketie and Derrick Tangelo are both fifth-year seniors, but both are in their first year in the program after transferring from Temple and Duke, respectively. Tackle Antonio Shelton left the program while Adisa Isaac and Hakeem Beamon were lost to injuries before the season began.

Mustipher’s absence has been felt even more.

Able to play anywhere up front, the team’s defensive captain had been attacking centers and guards with his nose-tackle play this season. He’s watched the last two games from crutches, however.

Manning up on centers has been a trickier adjustment for Ellies, a sophomore, and Izzard, a redshirt freshman, who both check in right at 300 pounds.

“It’s pretty difficult, I must say,” Ellies said. “But as you begin to play more and get more experience and technique, everything starts to move slower for you, especially on the inside. The physicality isn’t gonna change much, but as far as just the gameplay and being able to play certain techniques correctly, at the 0-tech, that just comes with experience and time.”

Their next chance will come at Maryland on Saturday where Ellies and Izzard are looking forward to chasing Tagovailoa in front of friends and family not far from where each of them grew up about 15 minutes away from one another.

Tagovailoa torched Penn State for 282 yards and three touchdowns last year in his highest-rated passing performance of the season and looks much more like that player lately than the one who tossed five interceptions against Iowa on Oct. 1.

Over the last two games, Tagovailoa has completed 43 of 67 passes for 608 yards and three touchdowns. On film, Penn State’s defensive linemen have noticed a particular strength. Tagovailoa isn’t afraid of contact. In fact, he’s made some of his better throws under duress.

Tagovailoa’s thrown seven of his 17 touchdown passes under direct pressure. He’s taken hits after firing six of those scoring throws.

Maryland’s shifty quarterback is also a crafty play-faker. He’s used fake handoffs or pump fakes to set up eight of his touchdown passes.

“He’s a very dynamic player,” Tangelo said. “He does a lot with the ball, they like to keep the ball in his hands. I’m just very impressed with how good he is.”