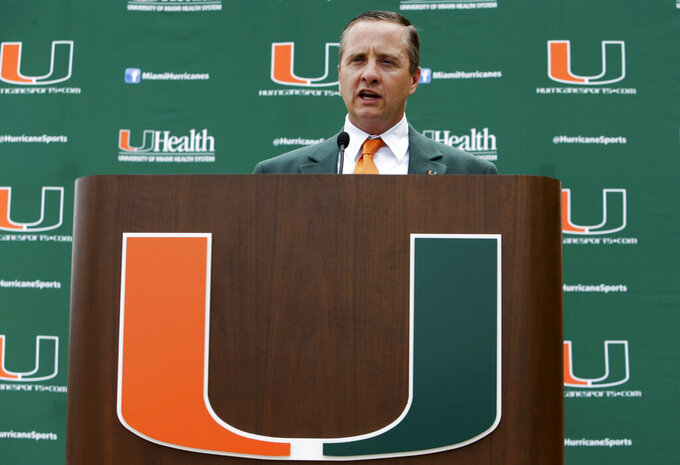 BOSTON (AP) — Boston College has hired its third athletic director since 2017, and this one is promising to stick around for a while.

Former Miami AD Blake James is taking over in Chestnut Hill after predecessors Martin Jarmond and Pat Kraft used the school as a stepping stone to higher-profile programs. James said on Thursday after he was introduced by BC’s president, the Rev. William Leahy, that his family plans “to spend many years in the Heights, immersing ourselves in the community.”

“I’m sure all the guys that were here before said the same thing: They’re going to stay here, they’re going to be here," said James, who was at Miami nine years before he was forced out in November.

“There were plenty of opportunities, if I would want to leave, to take advantage of those," he said. “As I said to Father Leahy: I plan on being here for retirement.”

Boston College has a decorated history in hockey — and, lately, women's lacrosse — but its revenue sports have struggled to compete in the Atlantic Coast Conference since the school left the Big East in 2005.

The football team hasn't won more than seven games since 2009, the same year the basketball team last made the NCAA Tournament. Since joining the ACC, the Eagles are on their fifth football coach and their fourth in basketball.

The continuity hasn't been much better in the AD's office, which is on its fourth leader since Gene DeFilippo retired in 2012, ending a 15-year tenure.

Former Michigan football walk-on Brad Bates, who had been the AD at Miami of Ohio, lasted for less than five years — including one in which neither the football nor the basketball team won an ACC game.

Jarmond replaced him and stuck around for three years, hiring football coach Jeff Hafley but leaving for UCLA before Hafley coached a game. Kraft came to Chestnut Hill from Temple and promised that the Eagles would compete for ACC championships in the revenue sports (they did not); he defected for Penn State after less than two years.

James spent 17 years at Miami — the last eight as AD — before he was ousted in November, two days after the Hurricanes blew a late, eight-point lead in football to a 3-6 Florida State team. Miami's football team hasn’t won an ACC title since joining the conference in 2004, winning its fifth and last national championship in 2001.

“I know this can be a wild and rocky ride,” said James, who returns to New England after previous stops at Maine and Providence.

BC has never won an NCAA championship in football or basketball, and the Eagles have fought for attention in a town where the professional sports teams have won 12 titles since 2001. But BC has 31 varsity sports and about 700 athletes, compared to 400 in 17 sports at Miami.

James also served as a chair of the NCAA Division I Council, on the NCAA Board of Directors and Board of Governors, the NCAA Football Oversight Committee, the ACC Name, Image and Likeness Committee, its Football Committee, and was chair of the conference’s athletics directors.

“He understands the issues facing college sports today,” Leahy said, “as well as appreciates the challenges and opportunities of the athletics at Boston College.”

James said NIL is one of the issues that he expects to wrestle with during his tenure at BC.

“None of us would have predicted where we are today three years ago, and it’s hard to predict where we’ll be in the future,” he said. “But I think my experience, both on the national level and the conference level, really gives me a lot of respect and a great voice in moving this forward.”