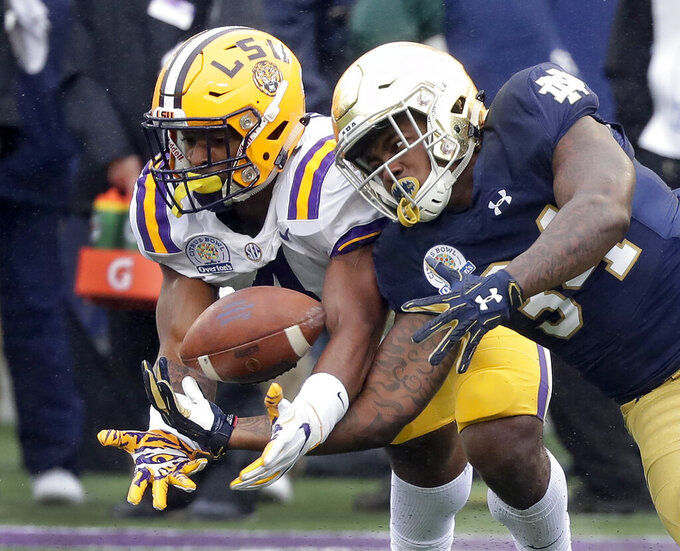 FILE - In this Jan. 1, 2018, file photo, LSU linebacker K'Lavon Chaisson, left, breaks up a pass intended for Notre Dame running back Tony Jones Jr. during the first half of the Citrus Bowl NCAA college football game in Orlando, Fla. LSU's top edge pass rusher is back and hungry after returning from a knee injury that limited him to less than one game last season. Outside linebacker K'Lavon Chaisson wants to be a difference maker for No. 6 LSU this season, and his teammates and coaches believe he will be.(AP Photo/John Raoux, File)

BATON ROUGE, La. (AP) — LSU's K'Lavon Chaisson has one season left to fulfill the promise that once lured Tigers coach Ed Orgeron to the highly regarded pass rusher's Houston home at 4 a.m. for a recruiting pitch.

Expectations for Chaisson were high last season — his second at LSU — and the 6-foot-4, 250-pound sophomore appeared primed to deliver when he had a sack and tackle for a loss among five total tackles in a season-opening victory against Miami . However, he went down with a season-ending left knee injury in that same game.

Now Chaisson asserts that the only residual effects of his anterior crucial ligament tear are good ones — changes in outlook and approach that have made him a better leader, teammate, and player.

"Plenty of guys have had the injury. So, I didn't really see it as a major injury," Chaisson said. "It definitely helped me out. It helped me with my patience and focus and film-room work — and I'm glad that it happened, actually."

Sixth-ranked LSU is just glad Chaisson is back on the field. The Tigers could have used him during a 2018 season in which they went 10-3 and lost two games — at Florida and at Texas A&M — by a touchdown or less.

"It's really good to have K'Lavon back," LSU quarterback Joe Burrow said. "He's one of the hardest workers, one of the most talented guys on the team. He's going to have a big year."

Chaisson was always around the team during his post-surgical rehabilitation last season, choosing to be as involved as possible, from viewing practices and games from the sideline, to participating in meetings. He even traveled to road games once his rehab schedule allowed.

"I'd rather be with the team than being alone," Chaisson said of his approach to recovering from injuries. "I'd just rather be around them — uplift, encourage them, show them if I'm smiling and going through this, that anybody can get through whatever they have going on."

Teammates and coaches say that approach was a reason why Chaisson was one of two players — along with offensive lineman Lloyd Cushenberry — chosen this season to wear the coveted No. 18 jersey that goes to key veteran leaders. Chaisson previously wore No. 4.

"It's definitely great having him back, especially when we rush the passer," said safety Grant Delpit, whose five sacks led the Tigers last season. "He's a leader on our defense and we need him."

Now the Tigers hope the prospect of Chaisson's edge rush and Delpit's blitz coming at the same time will rattle opposing quarterbacks who also have to throw against one of the most highly regarded defensive backfields in all of college football.

"They've got to worry about both of us," Delpit said, adding that he still expects to compete with Chaisson for the team lead in sacks. "We're going to duke it out. He's always on the line, so he might edge me out a little bit."

Orgeron, a former college defensive lineman who has extensive experience coaching the position, compares Chaisson to Arden Key. Now in the NFL with Oakland, Key set a single-season LSU record with 12 sacks in 2016.

Chaisson's presence "gives a lot of people confidence," Orgeron said. "He's one of the team leaders. He gives us an excellent pass rush off the edge that we haven't had. It gives us a strong guy at the point and leadership."

Chaisson grins while recalling Orgeron's recruiting courtship a few years ago, and how the LSU coach met him outside his home early one morning and followed him to the airport, where Chaisson was catching a flight as part of a recruiting visit to another school.

"You'd think that we was dating the way he was following me around," Chaisson said, adding that he thought Orgeron's recruiting tactics demonstrated "true dedication," even if they also seemed "a little" creepy at the time.

Orgeron suspects it all will have been worth it, given Chaisson's enthusiasm and dedication to coming back strong.

"He's stronger. He's bigger. He worked out hard this summer," Orgeron said. "He's cherishing every moment of being out there."