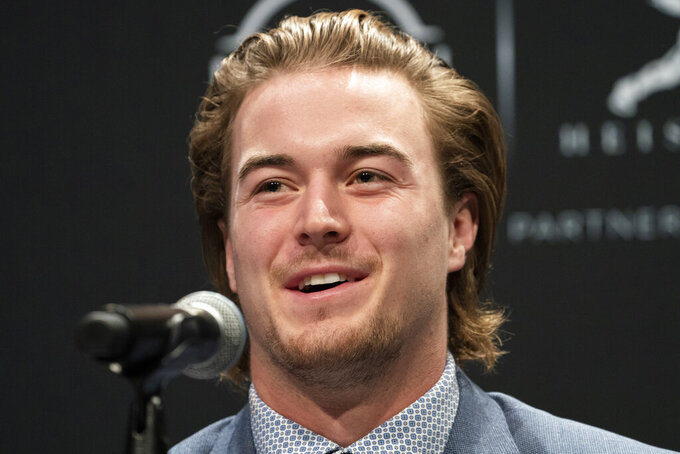 Narduzzi is putting no pressure on the ACC Player of the Year and third-place finisher in the Heisman Trophy race to make up his mind. Pickett dramatically improved his NFL draft stock during his record-setting season, which could play a factor in whether he tries to help the Panthers win 12 games for just the second time in the program's 117-year history.

“I think everybody’s got a business decision to make,” Narduzzi said. “Not everybody is going to agree with decisions that I make or Kenny makes or anybody else makes. ... We all know what we’d like but not everybody in this room has to deal with the consequences of playing or not playing. Those are big-boy decisions.”

Regardless of who is quarterback, Pitt will have a new play-caller against the Spartans after offensive coordinator Mark Whipple left last week to take the same job at Nebraska. Narduzzi said he hasn't decided who will run the offense in the bowl game.

Pickett isn't the only marquee player whose status is uncertain. Michigan State coach Mel Tucker said Monday there's a chance running back Kenneth Walker will miss the game due to health reasons.

Narduzzi's breakout seventh season with the Panthers will likely lead to a new deal. His current contract runs through 2024, but athletic director Heather Lyke indicated she and Narduzzi have been in talks and praised the major step forward Pitt took this fall.

“This program, it takes time to build it the right way,” Lyke said. "We have unbelievable confidence in coach Narduzzi and our staff and they are building it. This is just the start of where we’re headed.”