With Tagovailoa out, Hurts is so-so in Alabama spring game 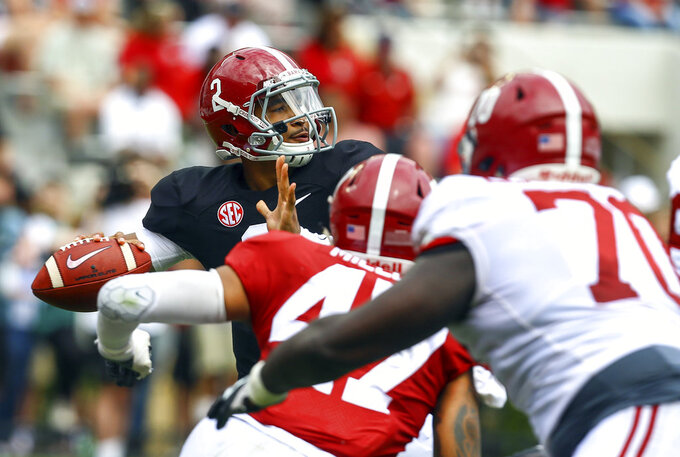 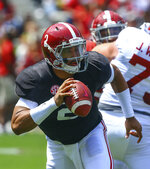 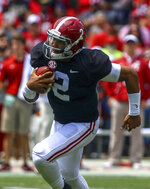 TUSCALOOSA, Ala. (AP) — Alabama quarterback Jalen Hurts threw an easy interception into the hands of cornerback Trevon Diggs to put an end to the first-team offense's final drive of the annual A-Day spring game. It was that kind of scrimmage for Hurts and his White team. Hurts completed 19 of 37 pass attempts for 195 yards and that one interception. More importantly, his offense was kept out of the end zone the entire game. "I was not disappointed in the way (Hurts) played," Alabama coach Nick Saban said. "I think we have got some guys that can rush a little bit, and even though we were rushing four guys most of the time, there was way too much pressure in the pocket for the quarterback to be able to operate like we would like." Hurts was the lone quarterback under the microscope on Saturday, but it's unlikely to stay that way. Come fall, the junior will once again share the stage with his competition for the starting job, Tua Tagovailoa, who was forced to watch from the sideline with an injury as the offense struggled. "I think (Hurts) made some good plays in the game and made some good throws," Saban said. "Obviously, I'm sure if you talked to him he would say, 'There's things that I wish I could have done better and would improve on.'" It was different this time for Tagovailoa, however. The national championship game hero was not backing up Hurts. Instead, Tagovailoa was nursing an injured throwing hand that has limited him for most of the spring practice schedule. The Hawaiian looked as if he was going to play in the spring game despite the injury, but suffered a setback in his recovery one week before the game. The injury was disappointing for Saban and the rest of the Crimson Tide, but it's only a small hindrance in the grand scheme of the quarterback competition. Saban has made it clear from the start of the spring that the decision on the starting quarterback will not be rushed, and the choice will likely come closer to the Crimson Tide's season opener. Both Hurts and Tagovailoa have proven to be worthy competitors for the job: Hurts is 26-2 as a starter and Tagovailoa came off the bench to help the Tide win the College Football Playoff championship game against Georgia last seasons. But only one can start. Would the loser of the quarterback competition transfer? Hurts' father, Averion Hurts, told Bleacher Report his son would likely transfer out if he does not start. But since this might not be decided until September, it's impossible to predict what might happen. SHORT-HANDED OFFENSE: Along with Tagovailoa, the Crimson Tide offense was without receivers Jerry Jeudy and Tyrell Shavers, lineman Matt Womack and running back Josh Jacobs. HOMETOWN STANDOUT: Tuscaloosa native Brian Robinson lead the Crimson team with seven carries for 26 yards and one touchdown. He also finished with a game-high in receptions, catching six passes for 59 yards. Robinson attended Hillcrest High School just seven miles from Bryant-Denny Stadium. THIRD-STRING QB: Mac Jones, who started for the Crimson team in Tagovailoa's absence, completed 23 passes on 35 attempts for 289 yards and two touchdowns against mostly second-team defenders. The sophomore was also named co-MVP for the game after taking zero snaps in 2017. "(Jones), he's been a baller," tight end Irv Smith Jr. said. "We've known what he can do, he just had his shot today and he made the most of it." BIG GAME FOR BULOVAS: Redshirt freshman kicker Joseph Bulovas made five of seven field goal attempts, connecting from 49, 35, 33 and 26 yards. He was named co-MVP along with Jones. "I was encouraged by how he did all spring long," Saban said. "He showed good consistency in both scrimmages and in practice when we do team work on field goals." ___ More AP college football: www.collegefootball.ap.org and https://twitter.com/AP_Top25 ___