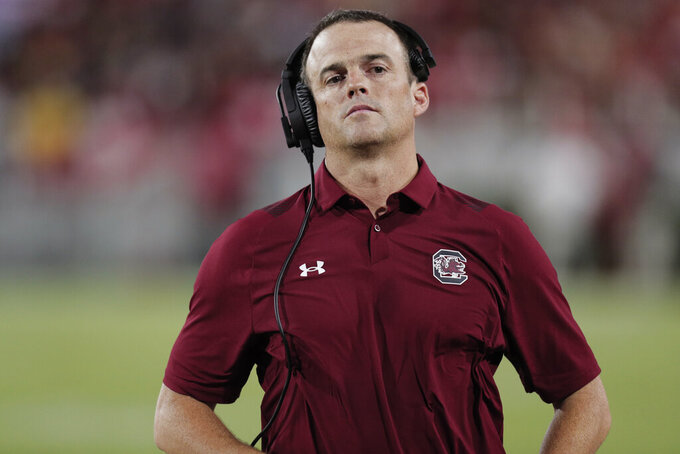 COLUMBIA, S.C. (AP) — Kentucky coach Mark Stoops has an extra reminder for his undefeated Wildcats at South Carolina: Be ready for a loud, wild atmosphere unlike anything they've seen in a while.

The Wildcats (3-0, 1-0 Southeastern Conference) haven't experienced a full-sized, full-throated opposing crowd for nearly two seasons. Attendance throughout the SEC was limited last season due to the COVID-19 pandemic and Kentucky has opened this season with three straight games at home.

“We do have two classes and a significant amount of guys that haven't been in this environment,” Stoops said. “We are going to address it. I'm not going to overdo it, but they have to understand.”

A crowd of more than 77,000 is expected at South Carolina (2-1, 0-1). Gamecocks first-year coach Shane Beamer gave a strong message to the fanbase to come out early, fill the building and yell their brains out the whole time.

“If you wear a mask, great. The sound you make should be so loud, you tear the mask,” Beamer said.

South Carolina is seeking any edge it can find against an opponent capable of winning tight games. Kentucky started SEC play two weeks ago by holding on to defeat Missouri 35-28. Last week, the Wildcats trailed FCS opponent Chattanooga in the second half before pulling out a 28-23 victory.

The Wildcats insisted they didn’t look past the Mocs, but didn’t seem totally engaged either until they fell behind and responded on both sides of the ball. Stoops made a point of not apologizing for being undefeated and first-year offensive coordinator Liam Coen believes their first road game would have players’ attention.

“If you love the game and you love to play, you get up for these kind of games,” he said. “To get on the road in a hostile environment against a great opponent, how can you not? I have no concern about us getting up for the game. I think the guys will rise to the occasion and play a sound football game.”

Some other things to watch for when Kentucky plays at South Carolina:

Kentucky is looking to start 2-0 in SEC play for the first time since 1977. That group went 6-0 in the league, but due to probation, they were ineligible to compete for a title. The Wildcats finished 10-1 including a 24-20 win at No. 4 Penn State.

South Carolina quarterback Luke Doty is expected to make his first start of the season against Kentucky. Doty entered fall camp as QB1, but hurt his foot in practice and missed the first two weeks. He played much of the 40-13 loss at Georgia last week when grad assistant turned quarterback Zeb Noland was injured.

Kentucky is unbeaten despite a minus-5 turnover margin that included three giveaways for the second time in three games. While the Wildcats are fortunate that opponents have scored “just” 20 points off those mistakes, they’re mindful the Gamecocks aim to be more opportunistic. “We’re just shooting ourselves in the foot with some little things,” Kentucky quarterback Will Levis said. “We’re so close to being a really good team and that we haven’t shown our full potential.

It's usually a college football headline when a Beamer faces a Stoops as it will be this weekend. South Carolina coach Shane Beamer, son of Virginia Tech great Frank, will look for his first SEC victory. Mark Stoops, the brother of Oklahoma great Bob, seeks to continue the Wildcats run of success in the series. They've won six of the past seven meetings.

The Wildcats’ ground game yielded just 102 yards against Chattanooga, their lowest total since gaining 59 at Alabama last fall. Junior Chris Rodriguez Jr. (377 yards) remains the SEC rushing leader while Kentucky is tied for 33rd nationally at 196 yards per game. “We know where we can be,” tackle Darian Kinnard said. “It’s just what are we doing to get there to where we see ourselves.”