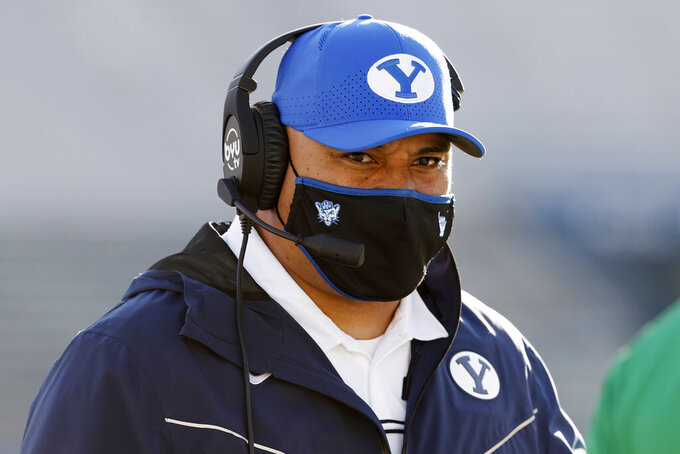 Undefeated seasons and positioning in the College Football Playoff rankings. The Cougars and Chanticleers are two of the three 9-0 teams in college football with No. 2 Notre Dame the other. The winner of this one will be well positioned to the Group of Five's representative for a New Year's Six bowl should No. 7 Cincinnati (8-0) falter.

BYU: LB Isaiah Kaufusi. The senior defender leads the Cougars with 59 tackles and is tied for team best with four sacks. He's also got two fumble recoveries and an interceptions.

Coastal Carolina: QB Grayson McCall. The redshirt freshman has done a remarkable job of taking care of the football while being productive. McCall has 20 touchdowns against one interception in his eight starts.

Both BYU and Coastal Carolina have games left in the regular season. The Cougars face San Diego State on Dec. 12 while the Chanticleers will go to Troy in a Sun Belt game postponed from last month. ... BYU athletic director Tom Holmoe said his school didn't want payment for the game, but discussed with Coastal AD Matt Hogue about the Chants coming to Provo, Utah, in the future. Hogue told him yes and the two agreed to work it out after the season. ... BYU is 9-0 for the first time since 2001 and fourth time overall. ... Coastal Carolina has the longest win streak to start a season in Sun Belt Conference history. ... The Chanticleers will host the league championship game against Louisiana-Lafayette on Dec. 19. ... BYU has scored 40 or more points in eight of its nine games this season. The only time the Cougars hadn't was a 27-20 win over Texas-San Antonio on Oct. 10. ... BYU is traveling more than 2,200 miles to go from Provo to Conway, South Carolina.