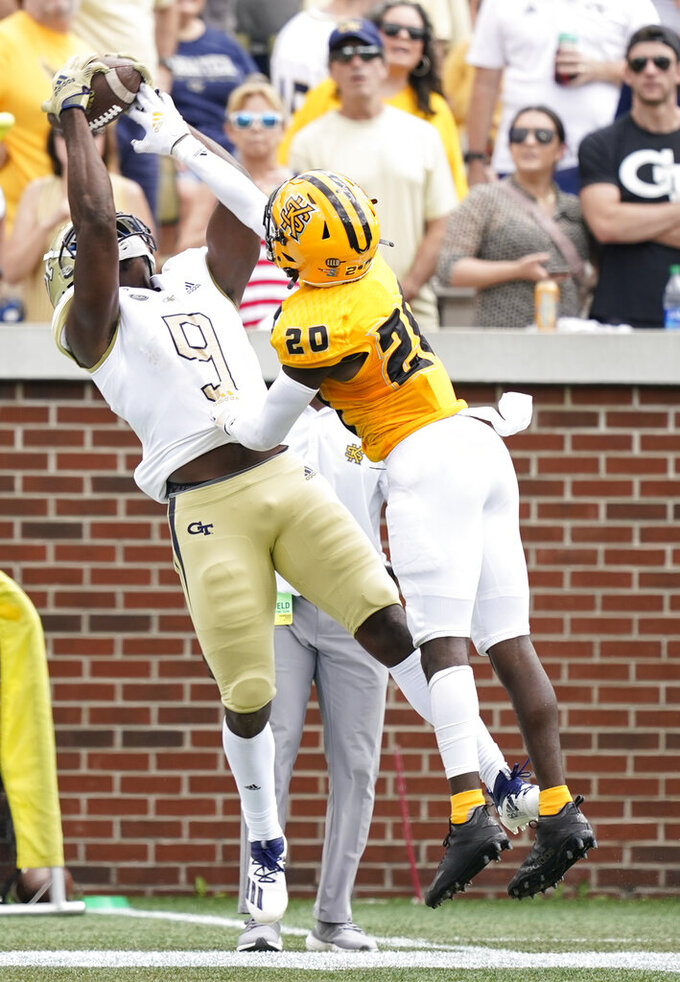 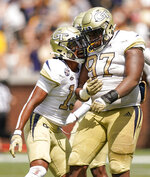 ATLANTA (AP) — Geoff Collins believes the resiliency demonstrated by his Georgia Tech players shows “we’re leaps and bounds from where we were.”

“To come out and play at a high level in every area of the game is pretty cool,” Collins said.

With the bounce-back win from last week's stunning loss to Northern Illinois, Georgia Tech (1-1) gained momentum for its Atlantic Coast Conference opener at Clemson next week.

The performances by Yates and Kyric McGowan, who had two touchdown catches, are evidence of improved depth from back-to-back three-win seasons.

Yates became the first quarterback in Georgia Tech history to throw for four touchdowns in his first start. The redshirt freshman completed 17 of 22 passes for 254 yards as the replacement starter for Jeff Sims, who was in uniform but held out with a left arm injury.

“I’m really proud of my guys out there,” Yates said. “They kept me upright all game up front.”

The defense forced three turnovers. Jordan Domineck knocked down an option pitch from Xavier Shepherd, recovered the fumble and ran 70 yards for a touchdown that gave the Yellow Jackets a 14-0 lead in the first quarter. Domineck created room for his scoring run by pushing Shepherd to the ground with a stiff arm.

The Owls then recovered an onside kick, setting up Shepherd's 39-yard touchdown pass to Adeolu Adeleke.

“I was proud of our kids’ fight,” said Kennesaw State coach Brian Bohannon, a former Georgia Tech assistant. “We got behind and kept fighting and got a little momentum late in the game.”

The right-handed Sims had his left arm wrapped and braced following the injury in the opener. Sims participated in pregame warmups but Georgia Tech announced before the game he would be used only in an emergency situation.

After Yates lost his helmet on a third-quarter hit and had to leave the field for a play, Temple transfer Trade Beatty was the fill-in instead of Sims.

Kennesaw State: The Owls had at least one first down on every possession until they were stopped on three downs with about five minutes remaining. Kennesaw State converted each of its two fourth-down plays and finished with 13 first downs while averaging 3.8 yards per rush. It was the Owls' first game against a Power 5 opponent.

Georgia Tech: The strong passing performance by Yates could spark debate about his role when Sims is fully recovered. Yates showed impressive poise when replacing Sims last week against Northern Illinois and again was effective against the Owls. “He played at a very high level and used his weapons around him,” Collins said.

McGowan's scoring receptions were from 4 and 39 yards. The Northwestern graduate transfer has three touchdown catches in his first two games with the Yellow Jackets.

“It’s been really fun,” McGowan said. “The coaches and the players and the rest of the staff have made my transition as fun as it could be.”

Kennesaw State quarterback Jonathan Murphy, who led the Owls with 98 yards rushing and two touchdowns in last week’s 35-25 win over Reinhardt, did not play. Murphy left the opener with an apparent lower leg injury and did not practice this week.

“We’re hopeful he can get back to practice next week,” Bohannon said.

Kennesaw State: The Owls will play at Wofford next week.

Georgia Tech: The Yellow Jackets play their first road game of the season when they visit Clemson.