1-year sentence for angry fan who made football game threat 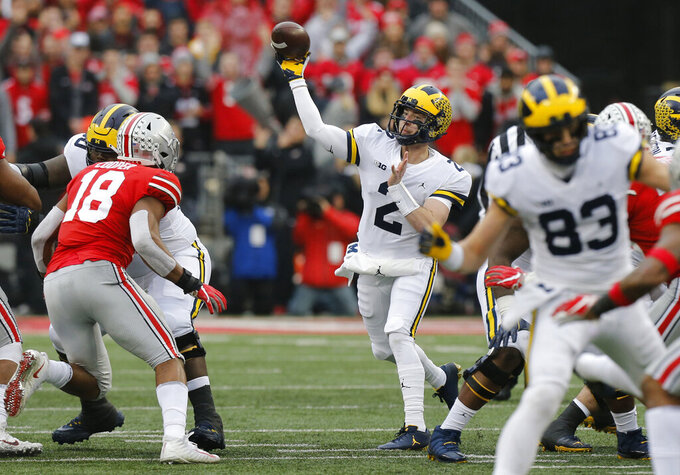 COLUMBUS, Ohio (AP) — A California man’s threats to harm college football players because they beat his favored team epitomized “fandom spiraled out of control,” something that can't be ignored in the age of mass shootings, a federal judge said Tuesday as he handed down a sentence of one year and a day over the 2018 threats.

Daniel Rippy, of Livermore, California, a Michigan native and University of Michigan fan, used Facebook Messenger to threaten a shooting at Ohio State University during its annual game against Michigan, and vowed to hurt players on the football team and then-head coach Urban Meyer, authorities said.

Federal Judge Algenon Marbley had harsh words for Rippy during Tuesday's sentencing done via video conference because of the coronavirus pandemic. Marbley referenced the mass shootings at Columbine High School in 1999 and Sandy Hook Elementary School in 2012 as he lectured Rippy on the seriousness of the threats against college athletes just playing a game. “It's college competition. That's all it is,” Marbley said.

What Rippy "epitizmies is fandom spiraled out of control," Marbley said. The judge added: “We have to take this seriously because it happens.”

The 29-year-old Rippy, being held in jail in Columbus, apologized several times, saying he'd been having “a bad day" when he made the threats and promised it would never happen again. As part of an argument for a lesser sentence, Rippy and his lawyer emphasized that once he's out of prison, he has a placement at a transitional housing center in California for men recently released from incarceration.

“I really didn’t mean for any of this. I feel really bad about it. I would never, ever do any act like this,” Rippy said.

Prosecutors asked for a 15-month sentence, on the lower end of sentencing guidelines. But in the end Marbley went even lower, noting that, “Some type of psychological or psychic imbalance may have animated this kind of behavior.” Rippy will receive credit for the 10 months he's spent in jail since his January arrest.

Rippy's mental health issues coupled with “some totally unrelated frustrations” led him to lash out the day he made the threats, said his attorney, federal public defender Soumyajit Dutta.

What Rippy needs most are “resources for both mental health treatment and for an ability for him to get back on his feet,” Dutta said before sentencing.

An indictment unsealed late last year in federal court in Columbus accused Rippy of “electronic communication” threat from California during the game between Ohio State and the University of Michigan on Nov. 24, 2018. The game was played in Columbus that year, and Ohio State won 62-39.

Rippy threatened a shooting at the school, saying in a Facebook message to the university, "I'm seriously going to hurt the students and all of the players from the football team,” according to a statement of facts filed with Rippy's July plea agreement.

Rippy made similar threats against Gonzaga University on its Facebook page three days before the football game, after the Gonzaga men's basketball team defeated Duke University on Nov. 21, 2018, the government revealed for the first time in an Oct. 7 court filing. Rippy is a Duke fan, the government said.

“Yeah and when I get my hands on the players from the basketball team there going to die one by one," that posting said, according to federal prosecutors. Rippy later apologized to the school.

“Rippy’s anger and frustration at the loss of his sports teams went beyond the usual shouting at the television as the clock ticks down the final seconds that many of us experience,” Jessica Knight, an assistant U.S. attorney, argued in a court filing.

Instead, Rippy's threat during the Ohio State game sent authorities into a panic as they tried to figure out where he was and whether he posed an imminent threat to a stadium filled with 100,000 people, Knight said.

Rippy, a Michigan fan who grew up in Grand Rapids, Michigan, moved at age 27 to California, where he worked in fast food but couldn't maintain a residence, the government said.