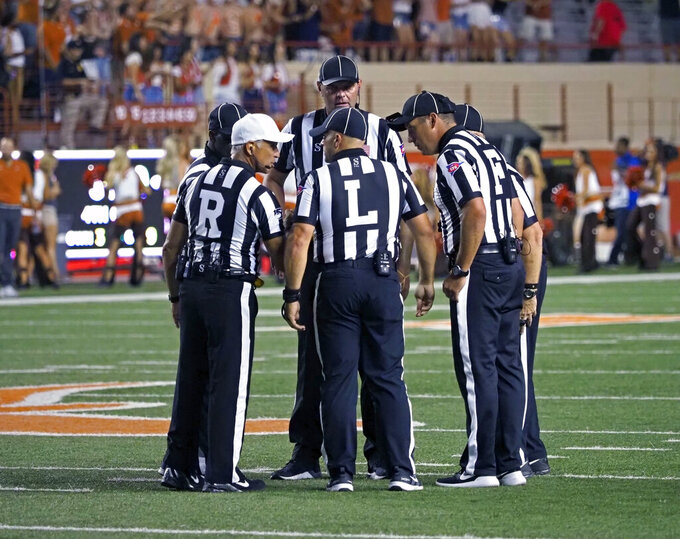 FILE - Referees from the Big 12 Conference discuss a call during the second half of an NCAA college football game between Oklahoma State and Texas, on Saturday, Sept. 21, 2019, in Austin, Texas. College football players penalized for targeting now can have part of their punishment appealed under new NCAA rules. (AP Photo/Michael Thomas, File)

INDIANAPOLIS (AP) — College football players penalized for targeting can have part of their punishment appealed, players faking injuries to stop the clock might not get away with it like they used to and blocking below the waist has been restricted further.

All are among the changes that will go into effect this season, which starts with 11 Bowl Subdivision games Aug. 27.

Targeting, generally defined as leading with the helmet to make forcible above-the-shoulder contact with an opponent, continues to carry with it a 15-yard penalty and the ejection of the flagged player. Players ejected in the second half are required to sit out the first half of the following game.

The new rule allows the conference office to request a review from the national coordinator of officials for a second-half targeting foul. If it's obvious a player was incorrectly penalized for targeting, the player would be cleared to play in the first half of the next game.

In an attempt to crack down on teams awarded an injury timeout after a player fakes an injury, schools and conferences will be able to report questionable scenarios to the national coordinator of officials. The coordinator will provide feedback. Any penalties levied would be up to the conference office or school involved.

The NCAA, hoping to decrease knee injuries, will now allow blocking below the waist only by linemen and stationary backs inside the tackle box, the area between the normal offensive tackle spots and extending backward to the goal line.

— If a ball carrier simulates a feet-first slide, officials will declare the runner down at that spot. The move came after a fake slide that Pittsburgh quarterback Kenny Pickett used to help clear his path for a long touchdown run in the Atlantic Coast Conference championship game.

— Defensive holding will remain a 10-yard penalty but will always carry an automatic first down.

— The replay official will address any clock adjustment and status only when a ruling is overturned with less than two minutes in the second or fourth quarters.

— Illegal touching by an originally ineligible player is penalized 5 yards from the previous spot and now includes loss of down.