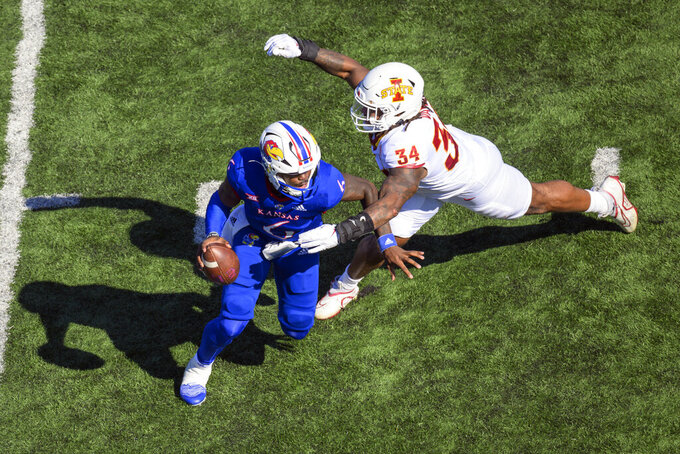 The much-anticipated matchup between Texas A&M and Alabama, after an offseason feud between the team's championship-winning coaches, is not nearly as interesting as expected.

Jimbo Fisher's Aggies did upset Nick Saban's Crimson Tide in a similar spot last year. Texas A&M was unranked with two losses when it knocked off unbeaten Alabama in College Station behind the performance of a lifetime from quarterback Zach Calzada.

The return match is Saturday in Tuscaloosa and the Aggies (3-2) have given no indication of being prepared for an encore.

Instead the game of the day will be in ... Lawrence, Kansas.

The five most intriguing games of Week 6:

The Jayhawks have a chance to go from fun, feel-good story to serious Big 12 contenders if they can knock off another bounce-back team in TCU. The Horned Frogs' offense has been the best in the nation (8.33 yards per play) behind resurgent fourth-year QB Max Duggan. Meanwhile, Kansas QB Jalon Daniels is getting early Heisman buzz. Should be a blast.

The Utes have been a runaway train since leaving Gainesville, Florida, disappointed in Week 1. The Bruins benefited from a soft early schedule, and then smoked Washington to get ranked. The division-less Pac-12 has a chance to turn into quite race and this feels like a game that will eventually help sort out who plays in Las Vegas for a title.

Texas vs. Oklahoma in Dallas

Anxious times for the Red River rivals. The loser leaves town with a third loss and at the bottom of the Big 12. The last time the Sooners lost more than two Big 12 games in a season was 2014. The last time they last lost three in a row was 1998. But 3-3 won't feel great for the Longhorns either.

The Tar Heels spent much of the first month of the season playing ghastly defense, but emerged 4-1 with one of the best quarterbacks in the country in Drake Maye. Miami's dreadful September included its potential first-round draft pick QB getting benched. Still, an ACC Coastal title is a realistic goal for the Hurricanes — which nicely sums up the state of that division.

Still interesting. The Aggies are talented enough to be a threat, especially if Heisman winner Bryce Young (shoulder) is either unavailable or limited for the Tide. Also, a motivated and ticked off Tide can be fascinating to watch in the way it's interesting to see what happens when a large object is flattened by a steamroller.

Other games matching ranked teams against FBS opponents, with lines from FanDuel Sportsbook.

Bulldogs have won five straight meetings in the Deep South's Oldest Rivalry and it's hard to know what to expect out of the Tigers ... GEORGIA 34-10.

Buckeyes led the Spartans 49-0 at the half last season and Michigan State isn't as good this year ... OHIO STATE 49-14.

Second straight week on the road against a ranked opponent for the Red Raiders ... OKLAHOMA STATE 31-20.

Recent results tell the story of two programs. Wildcats have won seven of eight after more than a decade of domination by the Gamecocks ... KENTUCKY 28-17.

Florida State (plus 3) at No. 14 North Carolina State

With Clemson looming, the Seminoles' turnaround season could get derailed ... FLORIDA STATE 27-24.