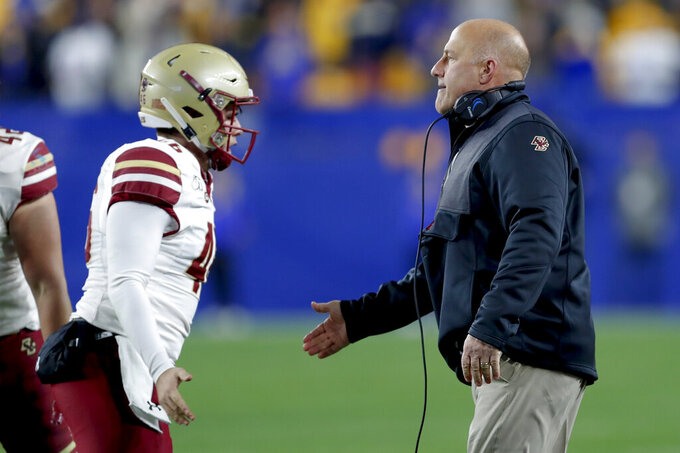 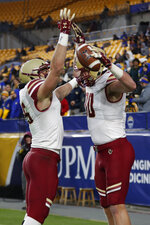 PITTSBURGH (AP) — Steve Addazio turned the corner and saw his players waiting for him. With a shove from freshman defensive tackle Kyiev Bennermon, the Boston College head coach made his way into the middle of what quickly became a giddy mosh pit.

For the next 30 seconds, all the angst over Addazio’s future with the program vanished, replaced by a mixture of relief and joy.

If his team’s 26-19 over Pittsburgh on Saturday was his last stand, so be it. Addazio would prefer to think of it as the launching point for something even more meaningful. The win assured Boston College (6-6, 4-4 Atlantic Coast Conference) of a bowl bid for fourth straight year and sixth in Addazio’s seven seasons on the job.

“All I cared about was getting this team to six wins and getting another month with them,” Addazio said. “And then watching what I watched. That was the greatest gift that I got. You want to talk about me? That was a great gift."

One the Eagles gave him behind another punishing performance by running back AJ Dillon, who racked up 178 yards rushing, 47 of them coming on Boston College’s final drive that drained the final 5:26 off the clock after the Panthers had pulled within a touchdown.

“I went into a different zone,” Dillon said. “I don't know how to describe that.”

Neither, really, could the Panthers (7-5, 4-4). Pitt entered with the sixth-best rush defense in the country and left shaken after the Eagles ran up 264 yards on the ground, the most the Panthers have allowed since the 2018 ACC championship game.

A fast one too. Dillon’s 61-yard sprint to the end zone in the third quarter swung momentum back to the Eagles after Pitt had taken the lead on a 39-yard touchdown run by Vincent Davis. Boston College’s defense, which came in next to last in the ACC in points allowed and last in yards allowed, made sure the advantage held up. The Eagles forced four turnovers, produced four sacks and let the Panthers reach the end zone just once.

It also gave Addazio — now 44-44 at Boston College — a chance to stump for an eighth season. The Eagles have 62 players who are redshirt sophomores or younger and managed to reach the postseason despite losing quarterback Anthony Brown to a knee injury in mid-October.

“I've got a really good football team,” he said. “We've got most everybody coming back. This is going to be one hell of a football team moving forward. And we've got another month to tweak it and turn it and coach it and develop it. That is so exciting. I think this can be something special."

Pitt entered the final two weeks of the regular season with a chance to repeat as Coastal Division champions. Instead, the Panthers ended up getting shut out on the road against Virginia Tech then getting pushed around at home by a program that hadn’t won in Pittsburgh since 1998.

Kenny Pickett threw for 323 yards for Pitt and Alex Kessman hit four field goals but the offense’s inability to finish drives remains an issue. The Panthers averaged just 20.2 points this season, taking some of the shine off a year that included a stirring upset over Central Florida and the emergence of a defense that ranked among the best in the ACC.

“I feel like we underachieved this season, tremendously,” senior linebacker Saleem Brightwell said. “I feel like especially with the players we have and the staff, to be 7-5 this year, it's a fall-off from what we should have been. We've just got to come back strong in the bowl game and try to get eight wins this year.”

Boston College: The Eagles need to figure out if a change is in order. Addazio has kept the Eagles competitive but they’re stuck in neutral in the ACC. Boston College has never finished better than .500 in conference play under Addazio’s watch. Yet his slam dance in the mosh pit hinted at how badly he’d like an opportunity to stick around.

“He's a pretty reserved and tame guy most of the time,” quarterback Dennis Grosel said. “I know he wanted this one badly. We wanted this one for him also. It was nice to see him let some emotion out."

Pitt: Given a chance to reach the eight-win plateau for the first time since 2016, the Panthers sputtered. The offense having trouble punching it in was hardly surprising. But the way the defense couldn’t get stops even though it knew what was coming was a stunner.

Boston College: A lower-tier bowl game. Hopefully the Eagles can get it in. Their appearance in last year’s First Responder Bowl against Boise State was cancelled in the first half due to inclement weather.

Pitt: Heading to a bowl game for the 11th time in 12 seasons, though the last two losses sent the Panthers dropping precipitously down the pecking order in the ACC.