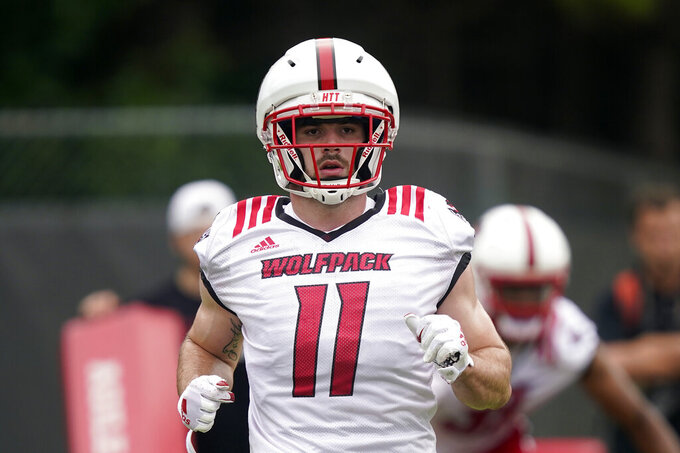 North Carolina State didn’t let its first major stumble under Dave Doeren linger. That has the Wolfpack back to the position that came through years of steady program building.

N.C. State has eight offensive starters and 10 defensive starters back, including quarterback Devin Leary from a broken leg and linebacker Payton Wilson after he led the Atlantic Coast Conference in tackles. That group helped the Wolfpack (8-4, 7-3 ACC) move past a four-win season and back to a bowl game for the sixth time in seven years.

“This isn’t last year’s team, obviously every year is new,” said Doeren, who is entering his ninth year. “But you can learn from things that happened. We won five one-possession games, we lost two. So in those one-possession games, there’s details, little things, that you can hold them accountable for out here because they add up. It’s a hungry team, and it’s competitive.”

The 2019 struggles had come after consecutive nine-win seasons built through developing young players into experienced contributors by the time they were needed for leading roles. Last year’s team capitalized off the experience from failure, too, to turn things around and set up this year’s Wolfpack for success.

Leary showed he had made a big step forward before going down to the October injury, including directing a last-minute touchdown drive to win at Pittsburgh. The Wilson-led defense was better down the stretch, allowing 20.2 points and 335 yards in the last five games after allowing 35.6 points and 472.1 yards through the first seven.

Now N.C. State is returning its top three rushers and top three pass-catchers, while the top 11 tacklers return on defense.

“There’s not so much you trying to figure out what’s going on from the guys,” linebacker Isaiah Moore said. “Everybody is kind of on the same page already, so it’s a good feeling.”

Some other things to know about the Wolfpack in 2021:

N.C. State should be strong on special teams with the return of placekicker Christopher Dunn and punter Trenton Gill.

Dunn, a junior, already holds the program’s career record for made field goals (56) as a reliable finisher when drives stall in scoring territory.

Gill, a redshirt junior, is averaging a program-record 46.3 yards per boot in his career.

N.C. State turned to a new offensive coordinator in Tim Beck to install his scheme despite last summer’s interrupted workouts due to the COVID-19 pandemic. That unit showed progress with both Leary and since-transferred Bailey Hockman at the helm.

“We were a watered-down version of what we will be,” Doeren said. “I think our offense will evolve quite a bit now that (players) know him, he knows them. They’re speaking the same language.”

Leary’s accuracy marked his biggest jump in his second year as a starter and first under Beck. He completed just 48% of his passes in 2019 but improved to 60% last year in his four games, the highlight coming with his 336-yard, four-TD day in the Pitt win.

N.C. State needs a healthy Wilson, a 6-foot-4 redshirt sophomore named first-team all-ACC by The Associated Press. He finished with a league-high 108 tackles despite missing a game, good for a 10.8-tackle average, to go with 3.5 sacks.

But Wilson was also often banged up with his physical style, and missed spring workouts after having surgery on both shoulders.

“I’m actually 100% healthy,” Wilson said. “I’m healthier than I’ve ever been since the beginning of high school.”

N.C. State opens by hosting South Florida on Sept. 2 in a run of three straight nonconference games, including a trip to Mississippi State on Sept. 11 and hosting Furman on Sept. 18.

Things will get tough in October and November with four of five games on the road, including a cross-division matchup at 14th-ranked Miami on Oct. 23.

19 minutes ago
By Stephen Hawkins an hour ago
4 hrs ago
By W.g. Ramirez 13 hrs ago
By Mark Anderson 14 hrs ago