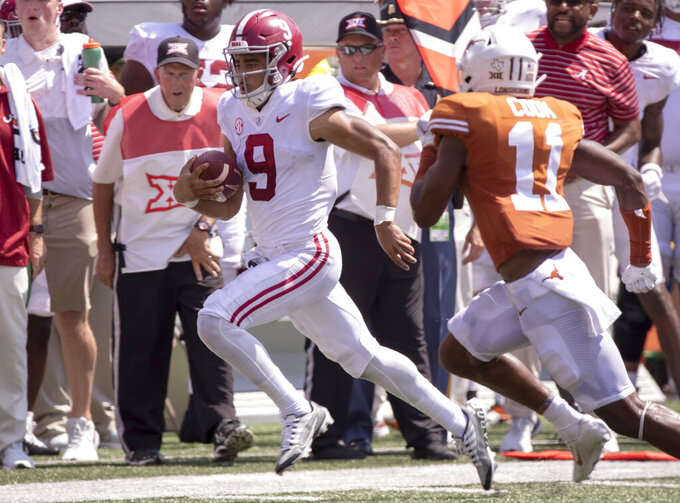 A penalty-packed performance against Texas only cost Alabama the No. 1 ranking, not a loss.

But a team that opened as the favorite to win the national championship hardly looked the part in the 20-19 victory in Austin on Saturday, especially on offense.

For the now second-ranked Crimson Tide's coach Nick Saban, the positive takeaways are an abundance of lessons and an early demonstration that his team can handle adversity.

“There's a tremendous amount of things that we can learn from as a team,” Saban said after the game. “What I told them was if you practice hard the game is easy. If you don't push yourself in practice, the game becomes hard.”

That one became hard thanks partly to an array of self-inflicted wounds, including a whopping 15 penalties. Only a Bryce Young-led drive in the final minutes and Will Reichard's game-winning field goal rescued Alabama from defeat on a day when Notre Dame and Texas A&M both went down. Defending national champion Georgia replaced the Tide atop the rankings.

Safety DeMarcco Hellams said losing the No. 1 spot isn't so important in September.

“We have self-motivation,” Hellams said Monday. “We don’t need any (outside) motivation here. The poll doesn’t matter to us. All that matters to us is going 1-0 every week. It doesn’t matter where you’re ranked until the end of the season.”

But as Saban said, “sometimes even when you win, you can lose” and cited the importance of accountability team-wide. Better to learn those lessons early than late.

But after a blowout win over Utah State, this one showed there's plenty of room for growth, and perhaps some concern:

— Alabama hasn’t yet had a downfield threat — or a consistent go-to presence — emerge at receiver, and it showed. Georgia transfer Jermaine Burton has just 45 yards on seven catches, though he had two touchdowns in the opener against Utah State.

— The 15 penalties were one shy of a dubious Alabama single-game mark. They included a holding call on the opening kickoff and three false start penalties. Even All-America linebacker Will Anderson had a rough day, twice getting flagged for offsides on the opening drive and later drawing a late-hit penalty.

— The Tide didn't manage a first down in the third quarter and, in fact, had five straight possessions without moving the chains.

There were bright spots. Alabama hit its stride in the fourth quarter with 10 of its 16 first downs. The defense held Texas star tailback Bijan Robinson to 57 yards on 21 carries. Alabama backup runner Jase McCellan provided a big-play spark when the passing game couldn’t, scoring on an 81-yard run.

And a penalty-free fourth quarter with the game on the line could have been pivotal.

“I guess it’s the fear of losing,” Gibbs said of the fourth-quarter turnaround. “We don’t like to lose.”

And so far, they haven't lost anything except that No. 1.