Mississippi State's defense set to take on for No. 1 Alabama 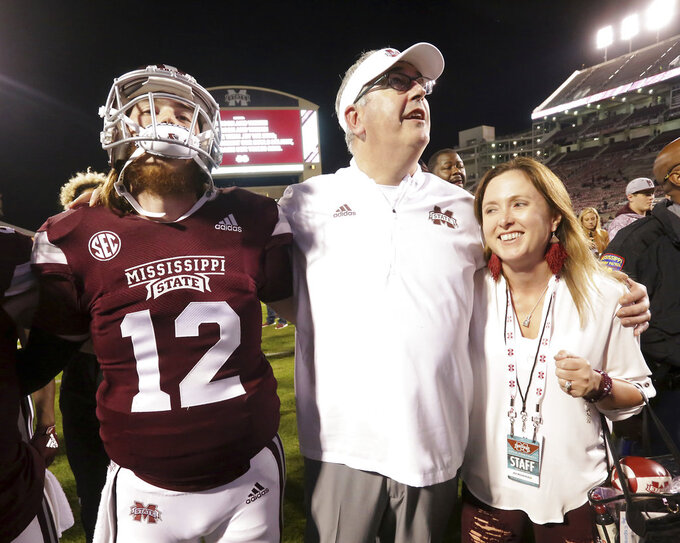 STARKVILLE, Miss. (AP) — Mississippi State's first-year coach Joe Moorhead has developed a routine during his weekly news conference: He introduces the next opponent and then talks in length about the matchup.

This week's subject was No. 1 Alabama.

"Obviously, a lot of this goes without saying," Moorhead said with a hint of a grin. "But we will go through the process anyways."

Spoiler alert: Moorhead has a high opinion of the Crimson Tide.

No. 18 Mississippi State (6-3, 2-3 Southeastern Conference) is the latest team that will try to slow down Alabama (9-0, 6-0, No. 1 CFP), which has won all nine of its games by at least 22 points. If the Bulldogs have any hope at pulling off of pulling off an upset, it will likely have to start with a defense that's been among the best in the country all season.

"You don't have to play a perfect game, but got to be darn near close," Moorhead said. "You've got to be in that range, because they're not going to beat themselves and they're very well coached."

Mississippi State is giving up just 12.3 points per game and has allowed nine offensive touchdowns this season, which is the fewest in the nation. The Bulldogs have allowed just two touchdowns over their opponents' past 51 possessions.

The group is anchored by the defensive line, which includes defensive end Montez Sweat and defensive tackle Jeffery Simmons. Sweat has 12 tackles for a loss, including 9½ sacks, while Simmons is fourth on the team with 42 tackles, including 9½ for a loss and also has five quarterback hurries.

While Mississippi State's offense has been a work in progress — and mostly responsible for the team's three losses — the defense has been a steady force. The Bulldogs have given up less than 14 points in seven different games this season, which also leads the nation.

"Every year I've been here, they've had a really tough defensive line, tough front seven," Alabama running back Damien Harris said. "We don't expect anything to be any different this year."

The Bulldogs had just finished another impressive, workmanlike defensive performance in a 45-3 victory over Louisiana Tech last weekend when the conversation turned to the Crimson Tide.

Bulldogs' linebacker Erroll Thompson is proud of the resume the defense has built through its first nine games of the season. But he knows the ultimate test is coming, especially when it comes to slowing down Alabama quarterback Tua Tagovailoa.

The sophomore has put up stellar numbers this season, completing 68 percent of his passes for 2,361 yards, 27 touchdowns and just one interception.

"We know those guys are going to put in the air," Thompson said. "They're going to be explosive, they've been explosive in every game this year. So it's a great challenge for us."

During Moorhead's description of Alabama's season, he had good things to say about several people on offense, including coordinator Mike Locksley, running backs Najee Harris and Damien Harris, and receivers Jerry Jeudy and Henry Ruggs III.

But he saved special praise for Tagovailoa.

"I call them game wreckers, because they can take the games over by themselves," Moorhead said. "I don't know that it is ever necessarily a matter of stopping them as it is neutralizing them or containing them. That is our hope with him."