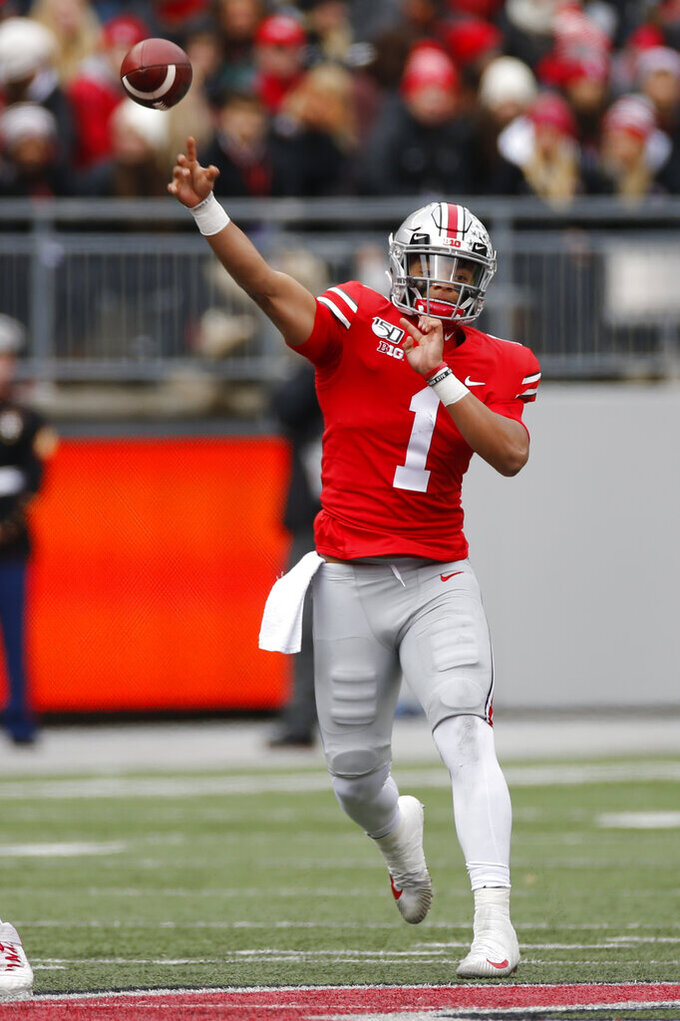 The 51-point spread is the largest for a Big Ten Conference game, according to several gambling organizations. Covering the historic margin should keep the Buckeyes in the No. 2 slot behind LSU and ahead of No. 3 Clemson. Expect Ohio State to keep the pedal down to stay sharp with No. 9 Penn State and No. 14 Michigan on tap for the final two games. Keeping it close and staying healthy would be wins for Rutgers, which has been searching for a head coaching replacement since firing Chris Ash on Sept. 29.

None. This is a mismatch at every position with the exception of maybe the punters.

Ohio State: QB Justin Fields. Threw for three touchdowns and ran for another in the first half of a 73-14 win over Maryland. The Buckeyes had 705 yards of offense and 40 first downs. While averaging 206.6 yards passing in conference games, Fields is 144 of 211 for 1,859 yards with 27 touchdowns and one interception.

Rutgers: RB Isaih Pacheco. After missing the Illinois game with an injury and getting a bye week, the sophomore is expected to play. He is seventh in the conference with 541 yards rushing on 123 carries (a 4.4-yard average) and has scored six touchdowns.

Ohio State has won 10 straight in the conference and 15 in a row overall. ... Buckeyes lead the nation in scoring offense (51 points) and scoring defense (8.6). They have won all their games by at least 24 points, the first Big Ten team since Ohio State in 1973 to start a season with nine straight 20-point wins. … RB J.K. Dobbins is second in the conference in rushing with 1,200 yards. He trails Jonathan Taylor of Wisconsin by 59 yards and has 42 fewer carries. ... Ohio State DE Chase Young, who has a league-high 12 sacks, expected to miss his second straight game with the university looking into possible NCAA violation. ... Buckeyes won last year’s game 52-3. ... Rutgers has lost 18 in a row in the conference. Last win was against Maryland on Nov. 4, 2017.