No. 23 Pitt has questions at QB ahead of Western Michigan 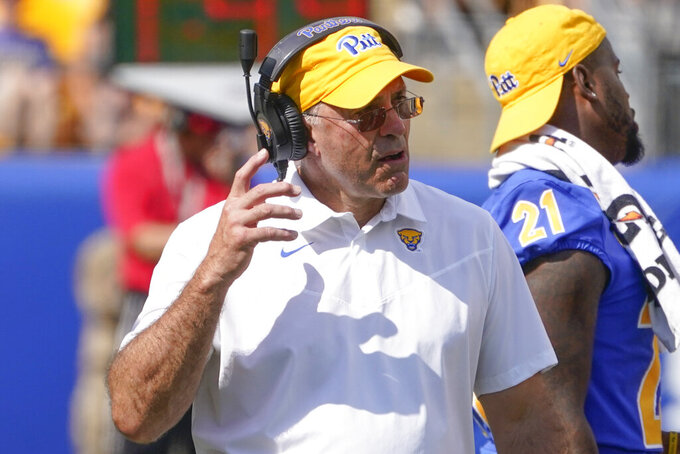 Seeking revenge is the least of No. 23 Pittsburgh's concerns as it heads to Western Michigan on Saturday. At least for coach Pat Narduzzi.

There are far more pressing needs at the moment for the Panthers than trying to get even with the Broncos, who pulled off a 44-41 stunner in Pittsburgh last fall. Namely, trying to figure out who will play quarterback.

USC transfer Kedon Slovis exited last week's overtime loss to Tennessee in the first half with an undisclosed injury. Backup Nick Patti came in and essentially played on one leg after hurting his left ankle late in the fourth quarter and has spent this week in a walking boot.

Narduzzi said there's a chance Slovis could be available but cautioned that it would be a “game-time decision,” meaning there's a chance redshirt freshman Nate Yarnell or Dartmouth transfer Derek Kyler could be under center as the Panthers (1-1) make a rare road trip to a non-Power Five conference opponent.

The bigger issue for Pitt may not be what happens on offense — which may have found a running game after Israel Abanikanda ripped off a career-best 154 yards rushing against the Volunteers — but what happens on defense. The Broncos torched the Panthers for 517 yards of total offense last year, most of it coming on variations of the same read-option play.

“We got kind of torn apart a little bit," Narduzzi said.

While quarterback Kaleb Eleby and wide receiver Skyy Moore are both now in the NFL, Western Michigan's approach remains the same behind quarterback Jack Salopek and running back Sean Tyler.

The Broncos haven't been quite as dynamic as they were in 2021, but they hung tough for three quarters before falling on the road at Michigan State then surged past Ball State in their Mid-American Conference opener last week.

Salopek, who grew up about 30 miles from the Pitt campus, saw the field briefly last year against the Panthers. He will take on a far greater role as Western Michigan welcomes a Power Five team to Waldo Stadium for the first time since 2015.

“We're not where we need to be yet,” said Salopek, whose longest completion through two games is just 22 yards. “But I think we'll be there soon.”

Western Michigan's roster is dotted with players who have ties to western Pennsylvania in addition to Salopek. Cornerback Bricen Garner played four seasons for the Panthers before transferring prior the Broncos before 2021. Cornerback Dorian Jackson went to school in Pittsburgh and played at nearby St. Francis (Pa.) before heading to Kalamazoo.

Garner called last year's victory, a game he left early with an injury, “a sweet moment.” Jackson cautioned against getting overconfident. Last he checked, the calendar reads 2022 not 2021.

“Last year doesn’t matter as much as people might think it does,” Jackson said. "We’ve got to continue to get that ball.”

Slovis has looked solid after taking over for Kenny Pickett, at least when he's been given time. The Panthers have had issues protecting the quarterback through two games. Pitt has allowed nine sacks already, one of the reasons the two quarterbacks atop the depth chart are banged up.

Narduzzi has been quick to point out that the line is one part of the equation. There have been instances where Slovis held onto the ball too long, at times due to wide receivers not running the right routes or not running them crisply enough. Narduzzi expects things to go more smoothly as the players get comfortable in first-year offensive coordinator Frank Cignetti Jr.'s system.

“It's a learning situation for our kids,” Narduzzi said. “They’re going to continue to learn how we want to do it and how it has to be done, and there’s no wiggle room for it to be done any other way.”

While the Panthers shrugged off the loss to the Broncos and rebounded to win the program's first ACC title, the memory of that long September afternoon that saw Western Michigan move up and down the field with ease lingers.

“It’s not in the past,” said Pitt senior defensive tackle David Green, who likened the grudge he holds to the one former NBA star Michael Jordan talked about during ”The Last Dance" documentary about the Chicago Bulls of the 1990s.

Narduzzi hasn't made it a point to talk about what happened. The way he figures it, he shouldn't have to.

“Do I have to say anything?” Narduzzi said. “I mean, I think the game speaks for itself, you know, so I really don’t need to say much.”