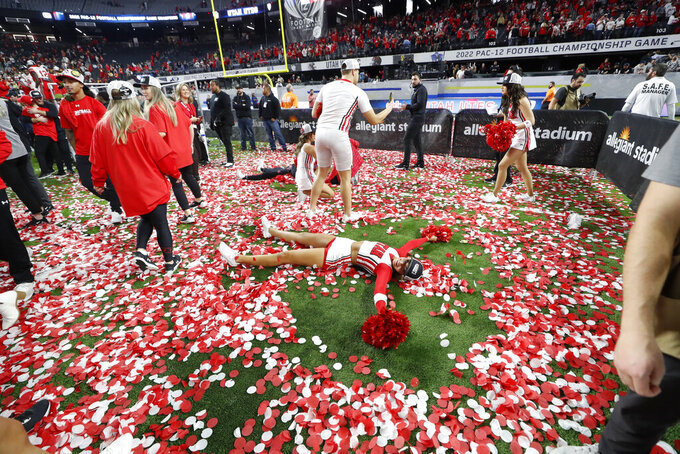 LAS VEGAS (AP) — Caleb Williams once again was starring in his own highlight video, breaking four tackles and finding himself in the open field for a 59-yard gain.

No. 4 Southern California looked as if it would do whatever it wanted against No. 12 Utah and coast into the College Football Playoff. But, Williams pulled his hamstring on that play and was never the same.

Neither were the Trojans, whose hope for a spot in the College Football Playoff all but ended as Utah rolled to a 47-24 win in the Pac-12 Championship game Friday night.

“Our play didn't really resemble the way we played the majority of this year,” first-year USC coach Lincoln Riley said. “Disappointed with some of the missed opportunities out there, but that's the name of the game when you get to this level in these kind of games against good football teams. You've got to go play good football to win, and we didn't do it.”

The loss by the Trojans (11-2) could open the way for Ohio State (11-1) to take their spot in the playoffs. USC is fourth in the CFP rankings, the Buckeyes are one step behind.

Ohio State coach Ryan Day had to be Utah's biggest fan. The Buckeyes' move up in playoff consideration, with 12-0 Michigan at No. 2 with the Big Ten championship game on Saturday, would give that conference two playoff teams for the first time. It also would extend the Pac-12's playoff drought — Washington in 2017 is the last team from that conference to make the playoffs.

Utah (10-3) is heading to the Rose Bowl, but the Utes already were going there regardless of the outcome of the title game. They are responsible for USC's only losses, having edged the Trojans 43-42 on Oct. 15 in Salt Lake City.

The Utes rolled up 533 yards of offense in the rematch, and Cam Rising passed for 310 yards and three touchdowns and earning game MVP.

Williams threw for 363 yards and three TDs. He entered the game as the leading Heisman Trophy candidate, but wasn't the same after getting injured in the first quarter.

Backup Miller Moss even took snaps on the sideline in the second half.

“I asked (Williams) at one point, ‘Are you 50%?’” Riley said. “He was not even close to 50%. I definitely thought about taking him out. He didn't let me. He wouldn't even let me take him out at the end. In terms of guys I've coached at that position, it may be the gutsiest performance I've ever seen. Most guys wouldn't even have played, and he still gave us a chance."

Williams, who also played with a badly cut pinky on his throwing hand, said his hamstring felt like “an old rubber band.”

“I was in my head and encouraging (myself) the game was bigger than I was feeling,” Williams said, drawing inspiration from a Kobe Bryant quote. “I also had a group of guys looking at me to go out there and lead them to victory.”

Williams painted his fingernails before game that read “(Expletive) Utah,” though the Utes apparently weren't aware of that until told afterward.

“You can put whatever you want on your nails,” Utah running back Ja'Quinden Jackson said. “I'm not going to judge him ... but I hope he liked it.”

The Trojans looked as if they were going to run away with the game, taking a 17-3 lead early in the second quarter behind some stellar play by Williams. He passed for 108 yards and two TDs and rushed for 76 yards in the first quarter

After USC failed to pick up a fourth-and-8 from Utah’s 37-yard line, the Utes scored two touchdowns in the final 3:55 of the first half, and suddenly the game was tied at 17. Instead of a rout, the game was beginning to look like the shootout the Utes won in October.

The game took on that tone at times in the second half, but USC had no answer for how to slow down Utah, which outscored the Trojans 44-7 in overcoming that two-touchdown deficit.

A announced sellout crowd of 61,195 made this the largest for a neutral-site Pac-12 Championship. It beat the previous record of 58,476 fans. who watched Southern California-Stanford in Santa Clara, California, in 2015