Pitt eyes bounce back against New Hampshire after upset loss 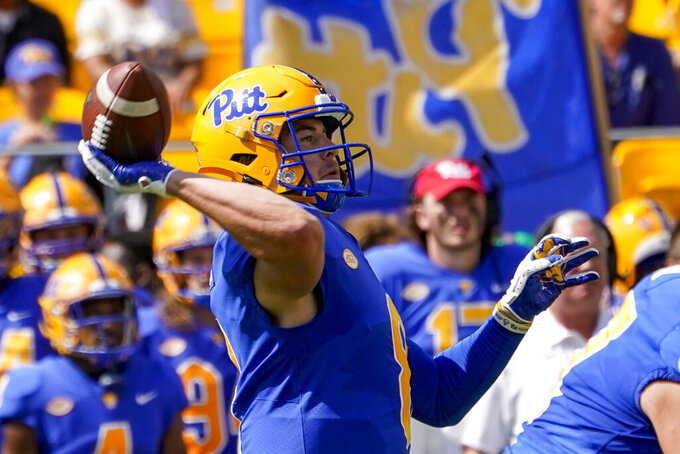 Pittsburgh quarterback Kenny Pickett (8) throws a pass against the Western Michigan during the first half of an NCAA college football game, Saturday, Sept. 18, 2021, in Pittsburgh. (AP Photo/Keith Srakocic)

PITTSBURGH (AP) — Pittsburgh coach Pat Narduzzi might have been kidding. His message, however, was serious.

Frustrated by the inability to slow down Western Michigan during a 44-41 loss at home last week, Narduzzi said he considered — perhaps jokingly, perhaps not — moving up to the coach's box this Saturday when New Hampshire (3-0) visits Heinz Field to face the Panthers (2-1).

Narduzzi will be on the sideline when Pitt tries to avoid a second straight home pratfall against the Wildcats, who are ranked No. 21 in the Football Championship Subdivision. Still, the man who became one of the most respected defensive coordinators in the country during his long run as an assistant at Michigan State planned to do more than just a “drop-in” during defensive coach meetings this week.

“I’m going to have to get over there a little bit more just to see what’s going on,” Narduzzi said.

That's fine with defensive coordinator Randy Bates, whose unit gave up 516 yards against an offense that basically kept running the same run-pass option play over and over again.

“The bottom of the line is the ownership (of the performance falls) on me,” Bates said. “So let’s just put it right there.”

The loss ended Pitt's goal of going undefeated in nonconference play for the first time since 2000. It did not, however, have any impact on the opportunity to win the Atlantic Coast Conference Coastal Division title. A loss to New Hampshire wouldn't either, though another ugly Saturday could have a long-term impact on the idea the Panthers have made much progress in Narduzzi's six-plus seasons on the job.

Not that Narduzzi is particularly worried. Asked if he's concerned about the uproar surrounding a stunningly feckless defensive performance a week after winning on the road at Tennessee, Narduzzi shrugged.

“I worry about the guys in this room,” Narduzzi said, referencing his players. “Everybody in here knows what happened and I can’t help the fans. I apologize to them, and try to prevent it from happening again.”

Narduzzi and New Hampshire coach Sean McDonnell worked together in the summer of 1989 when they created a house painting business in an effort to earn a little extra cash. They were working on a beachfront home in New Jersey a bucket of paint spilled on the carpet. The accident left the two “scrambling."

“We have been through stress together and adversity,” Narduzzi said with a laugh.

Pitt has spent the last two-plus seasons looking for any kind of consistency in the running game. The Panthers are tied for 95th in the country, averaging 131.3 yards per game. Senior quarterback Kenny Pickett actually led Pitt in rushing last week (9 carries for 57 yards) while the rest of the team managed just 36 yards on 14 carries.

Part of the problem is up front, where the Panthers are struggling to generate the kind of push required to open up holes for Vincent Davis and Izzy Abanikanda.

“We’re turning (defenders) loose, for whatever reason, and somehow, some way we got to get a hat on a hat and get our bodies on their bodies," Narduzzi said. “You don’t have to knock them up into the goalposts, but we got to get some hats on hats and put people on people.”

Pickett moved past Hall of Famer Dan Marino into second place on the school's all-time passing list last week. The fifth-year senior's total of 8,923 yards is still well back of Alex Van Pelt (11,267), but at his current pace (313 yards per game in 2021) Pickett could track down Van Pelt by the end of the season.

Pitt is 18-1 all-time against FCS opponents but the Wildcats are dangerous. Quarterback Bret Edwards has thrown seven touchdowns without getting picked off this season, with four of those scores going to wide receiver Brian Espanet.

"Bret keeps doing the things that I think make him a good quarterback,” McDonnell said. “He gets the ball and distributes it and again he distributed it to a lot of different people today. He puts the ball on people and he does it when he’s on the run.”