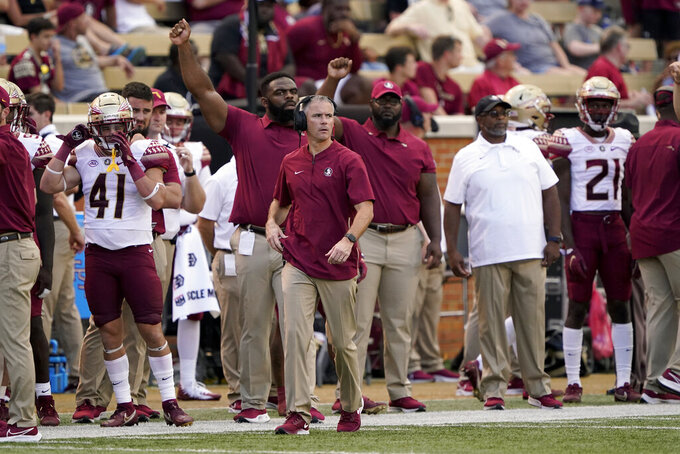 One would be winning back-to-back games against an FBS team for the first time since Satterfield’s first season in 2019.

Florida State’s Mike Norvell would simply settle for a win.

They are two of the youngest teams in the Atlantic Coast Conference. Louisville (2-1, 0-0) coming off a 42-35 win against UCF, looks to continue its momentum when the teams meet on Saturday; Florida State (0-3, 0-1) seeks to find any footing after a disappointing start.

The Seminoles committed six turnovers and were penalized seven times i n a 35-14 loss at Wake Forest, falling to 0-3 for the first time since the late Bobby Bowden’s first season in 1976.

“We’re having to go through some painful moments,” Norvell said. “It’s challenging. We are a young team. We’ve got guys that are being put in positions where, with all the right intentions, are learning some tough, tough lessons that they haven’t experienced. And for us we can’t allow the pain of some of our failures to go wasted.

Florida State has 23 true or redshirt freshmen among the 54 players on its offensive and defensive depth chart. That’s 42.6% of the rotational players, and that's not factoring in redshirt freshmen who are kickers, punters or returners.

Louisville has 70 freshmen and 13 sophomores on its 115-player roster (72% are underclassmen). But the Cardinals have a leader in quarterback Malik Cunningham, who has completed 61.2% of his passes and has six rushing touchdowns in three games. Cunningham is just one behind the FBS leaders in rushing touchdowns.

“He obviously is a great runner, and he just puts a lot of pressure on defenses,” Satterfield said. “We’ll see as the season goes on if we’re going to be able to utilize him in that run game. I don’t want him to run it 20 sometimes either. He’s not a running back. He’s a quarterback. We want to take advantage of that when it presents itself.”

Some other things to know when Florida State plays host to Louisville:

Florida State had just nine sacks in nine games in 2020 but have already accumulated 12 sacks this fall. The Seminoles have revitalized the pass rush in large part due to transfers like Jermaine Johnson, a former Georgia defensive end who has 28 tackles, seven tackles for loss and five sacks.

Florida State has played three different offensive line starting lineups in three games. But tackle Robert Scott and center Maurice Smith have practiced, and Norvell said “it’s trending in the right way” that the Seminoles will have the linemen back for the Louisville game.

Sometimes statistics can be misleading. But not for the Seminoles. Florida State's mistakes are adding up and contributing to its early season struggles. The Seminoles lead the FBS in turnovers (10) and are 118th in penalties with 27 (for 233 yards).

Louisville averages 165 yards on the ground — when combining offensive and defensive states. The Cardinals give up nearly as many rushing yards (162) as they produce in their rush offense (168).