All eyes on Richardson as Kentucky, Florida begin SEC play 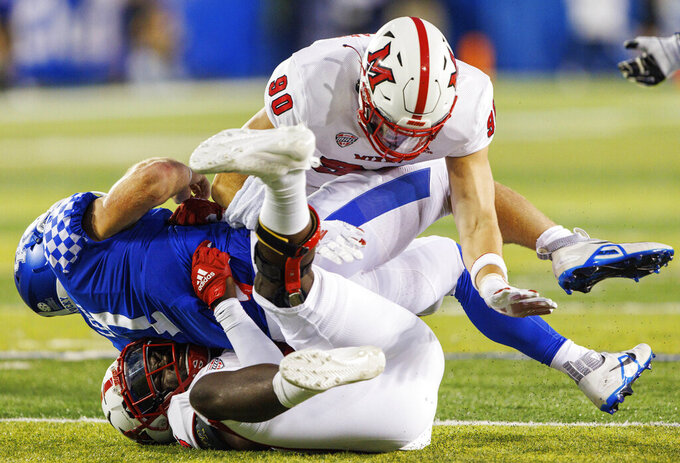 Long runs, precise throws, broken tackles, clutch plays, a whirly-bird 2-point conversation, the go-ahead touchdown. It was a breakout performance for a hometown kid who’s suddenly become one of the hottest players in college football.

Now everyone is wondering: What will he do for an encore?

Richardson and the 12th-ranked Gators have a chance to prove their 29-26 victory over then-No. 7 Utah was no fluke when they host No. 20 Kentucky (1-0) to begin Southeastern Conference play Saturday night.

“Everything you want in a quarterback, he has,” Florida receiver Ricky Pearsall said of Richardson. “He’s got a rocket for an arm. If he wants to throw it across the entire field, he can do that. Just ask him, he’ll throw it a hundred yards.”

Richardson threw for 168 yards, ran for 106 more and three scores, and, most importantly, played turnover- and sack-free football against the Utes.

Sure, there was one third-down throw that should have been picked, but not even detail-oriented coach Billy Napier could do more than nitpick.

“A little jittery early on, made a few mistakes, but, ultimately, he operated well,” Napier said. “He’s his own worst critic now. He’s going to watch the film three times and tell you everything he could have done better, but he rose to the occasion is what I would say. ... I saw a guy who is prepared behind the scenes, is a product of his work, and it showed up.”

Florida was rewarded for its season-opening upset with a rare rise from unranked to No. 12 in the latest AP Top 25 poll.

“Onto the next because, you’ve got to beat them to keep going up,” center Kingsley Eguakun said. “And if you don’t, you know what happens. … At the end of the day, we’ve got to go handle business.”

Kentucky handled penalty-prone Florida last season in a 20-13 win in Lexington thanks partly to returning a blocked field goal for a touchdown. That loss was the start of Florida’s freefall — dropping six of nine to end the season — that led to Dan Mullen’s dismissal and Napier’s arrival.

The Wildcats have enjoyed more coaching stability than Florida in the past decade, with Mark Stoops entering his 10th season. They pulled away from Miami (Ohio) in the second half of their opener to win 37-13 at home. Will Levis threw for 303 yards and three touchdowns, but he also threw an interception and was sacked four times.

Levis, who was mostly a non-factor against the Gators last year and considered a first-round NFL draft pick in 2023 along with Richardson, expressed disappointment with his season-opening performance.

“We don’t need him to put that kind of pressure on himself,” Stoops said. “We love and respect his drive and motivation, and that’s obvious. But there also can be added pressure when the expectations go high on him.

“We just need him to be him. He is very driven and playing at a very high level.”

This is an unusual matchup for Kentucky and Florida: It's just the fourth time in 73 meetings that both teams are ranked. The Gators won two of the previous three, coming out on top in 1998 and in 2007, while Kentucky’s win came in 1950.

Florida and Kentucky have played every year since 1967. The Gators won 31 straight before splitting the last four.

Kentucky is expected to be without running back Chris Rodriguez for the second straight game but got good news Thursday when super senior linebacker Jordan Wright was cleared to play.

Rodriguez, the team’s leading rusher with 1,379 yards and nine touchdowns in 2021, is dealing with an off-the-field issue that Stoops says is out of his control.

“There’s layers to this that I’ve been advised I can’t comment on it,” Stoops said. “It’s not that I’m trying to hide things from you, but the players have rights and things of that nature with this situation.”