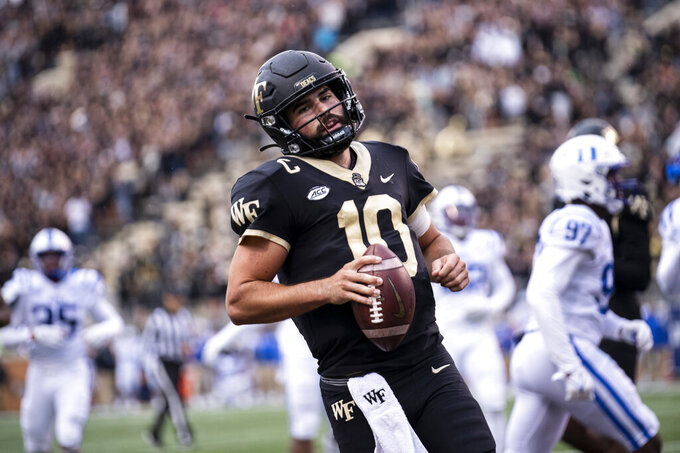 Wake Forest quarterback Sam Hartman (10) scores a touchdown during the first half of an NCAA college football game against Duke on Saturday, Oct. 30, 2021, in Winston-Salem, N.C. (AP Photo/Matt Kelley)

Michigan State moved up to No. 5 in The Associated Press college football poll and Wake Forest became a top-10 team on Sunday for the first time in school history.

Georgia is a unanimous No. 1 for the fourth straight week in the AP Top 25 presented by Regions Bank. The rest of the top four was unchanged from last week, with Cincinnati at No. 2, Alabama at No. 3 and Oklahoma at No. 4.

Star running back Kenneth Walker and the Spartans jumped three spots by beating Michigan in the weekend's biggest game. The last time Michigan State broke into the top five was 2015 when the Spartans made the College Football Playoff.

The first CFP selection committee rankings of the season will be released Tuesday night.

In the AP poll, Ohio State slipped a spot to No. 6 despite holding off Penn State and Oregon was No. 7.

No. 8 Notre Dame, Michigan and Wake Forest rounded out the top 10.

The Demon Deacons have their best ranking in program history, topping the No. 11 they reached in 1947. Wake Forest had been the only team in a Power Five conference that had never been ranked in the top 10.

The Demon Deacons reached another first on Saturday, improving to 8-0 with a victory against Duke.

— No. 20 Houston is ranked for the first time under coach Dana Holgorsen after handing SMU its first loss of the season. The last time the Cougars were in the Top 25 was 2018.

Houston is the 45th different team to appear in the Top 25 this season.

— No. 24 Louisiana-Lafayette is back in the Top 25 after being in the preseason poll and falling out after losing its opening game.

— No. 25 Fresno State also returned to the rankings after handing San Diego State its first defeat in a crucial Mountain West game.

— Pittsburgh dropped from No. 17 to out after losing at home to Miami.

— Iowa State is out again after losing at West Virginia. The Cyclones jumped back into the rankings last week, but it turned out to be a brief stay.

— San Diego State fell out after a four-week run.

Two Power Five leagues, the Atlantic Coast Conference and Pac-12, have just one ranked team while two from the Group of Five, the American Athletic Conference (three) and Sun Belt (two), have multiple teams ranked.

This story has been corrected to show that Alabama is No. 3 and Oklahoma is No. 4, not the other way around.