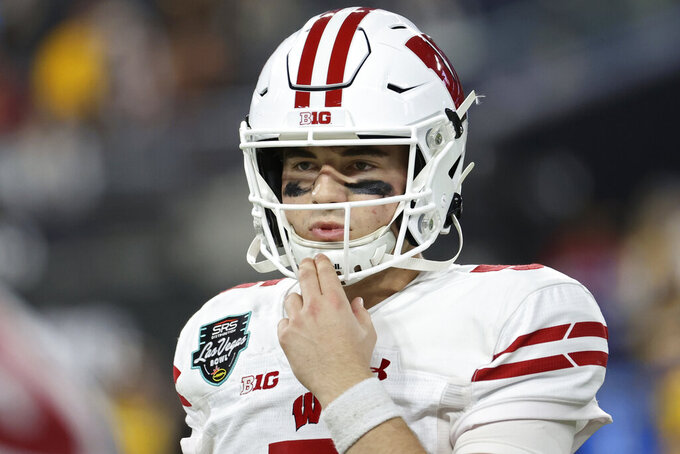 MADISON, Wis. (AP) — Wisconsin quarterback Graham Mertz says his confidence hasn’t wavered even during an offseason in which Oklahoma transfer Caleb Williams’ name got mentioned as his potential replacement.

Mertz is now working with a new receiving corps and new offensive coordinator as he attempts to gain consistency and live up to the lofty expectations that accompanied his arrival.

“My confidence never really has gotten tested to the point where I doubt myself,” Mertz said Monday. “It’s a bad thing to ever doubt yourself or have that lack of confidence. For me, it’s how can I prove to myself every day that I’m evolving into the quarterback I want to be.”

Mertz is the highest-rated quarterback prospect to sign with Wisconsin during the era of recruiting websites. He went 20 of 21 and threw five touchdown passes – tying a school single-game record – while leading Wisconsin to a 45-7 victory over Illinois in his first career start back in 2020.

But he’s been up and down since, with Wisconsin’s fortunes often resting on how well he protects the football.

Those so-so results might explain why Wisconsin was considered a potential destination when Williams entered the transfer portal after a stellar freshman season at Oklahoma. The connection got enough attention that Badgers fans chanted “We want Caleb” during a Wisconsin-Minnesota men’s basketball game in late January.

Wisconsin coach Paul Chryst said he kept Mertz informed of the situation as Williams pondered a decision before eventually choosing Southern California. Chryst noted that he never had any personal discussions with Williams.

Mertz had no hard feelings and said he appreciated the way Chryst kept him updated.

“It’s a coach’s job to find the best player,” Mertz said. “What am I going to say? ‘Aww, no, I deserve this?’ I don’t deserve anything. I’ve got to prove it every day, prove it’s my job. And that’s what I’m going to do. That’s what I’ve always done.”

Mertz faces a couple of new challenges this year.

The departures of tight end Jake Ferguson and receivers Kendric Pryor and Danny Davis leave Mertz without his top three targets from last season. Chimere Dike, who had 19 receptions for 272 yards and a touchdown last season, is the only Wisconsin wideout who caught more than three passes a year ago.

Bobby Engram, who spent last season as the Baltimore Ravens’ tight ends coach, is friendly with the Williams family. That’s part of the reason Wisconsin was linked to the former Oklahoma star. But Engram also knew Mertz well before taking this job and has praised his quarterback’s efforts during spring practice.

“Graham wants to be great in terms of his approach – professional approach – his work ethic and really trying to own the offense and own his leadership role in the offense,” Engram said.

Engram says one way Mertz could reduce his turnovers is by occasionally going to a checkdown rather than taking an unnecessary risk. Engram cited an instance from Saturday’s practice

“He has an aggressive mentality, which you like,” Engram said. “You want to make the big plays. But at the same time, let’s take the ones that they give to us. We had a third-and-3 on Saturday and he took a shot, a great throw, and didn’t come up with the play. But we had a first down on an underneath route right in front of us.”

Wisconsin also has experimented with having Mertz work under center more often this spring after he operated exclusively out of the shotgun in high school.

“It’s just to get a better sense of timing and truly just trusting the drop and being able to translate that into the gun,” Mertz said. “It makes complete sense. You go and look back at all the quarterbacks from the past, and they were all under center to start, and now they’re all in the gun and they have that sense of timing in their head.”

Mertz said he’s enjoying the fresh start with a new offensive staff and new collection of receivers. After a winter of uncertainty, he's looking forward to having a productive autumn.

“If you’re not growing, not evolving, you’re just going to be left behind in the dust,” Mertz said.