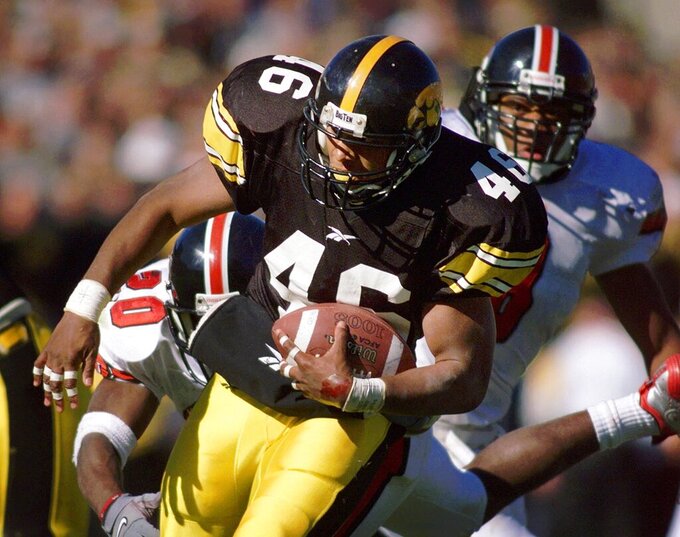 Betts starred for the Hawkeyes from 1998-2001 and is the only running back in program history to lead the team in rushing four straight years. Betts went on to play nine seasons in the NFL.

The 41-year-old Betts was head coach the last two years at Pine Crest School in Fort Lauderdale, Florida. He was a high school assistant in Florida from 2013-18.

“I am excited to be back at my alma mater, where I had the opportunity to develop as a player under coach Hayden Fry and coach Kirk Ferentz,” said Betts. “It is incredible to feel like things have truly come full circle for me. I’m ready to get to work.”

Barnett had been named offensive line coach at Tulane three months ago. He previously was on the staff at Miami (Ohio) for seven seasons. The RedHawks' line allowed just four sacks last season and the offense ranked second in the Mid-American Conference at just under 400 yards per game.

“I am grateful for the opportunity to work with coach Kirk Ferentz and his staff and to help maintain the standard of excellence in the Iowa offensive line room,” said Barnett. “I am familiar with the success of the Iowa program and the Big Ten Conference overall. My family and I are excited to get to Iowa City and be part of an outstanding institution and athletics program.”

Betts replaces Derrick Foster, who took a job with the Los Angeles Chargers, and Barnett takes over for Tim Polasek, recently hired as offensive coordinator at Wyoming.

By The Associated Press 7 hrs ago
By Ralph D. Russo 8 hrs ago
9 hrs ago
By Dave Skretta 10 hrs ago
By Caroline Pineda 11 hrs ago