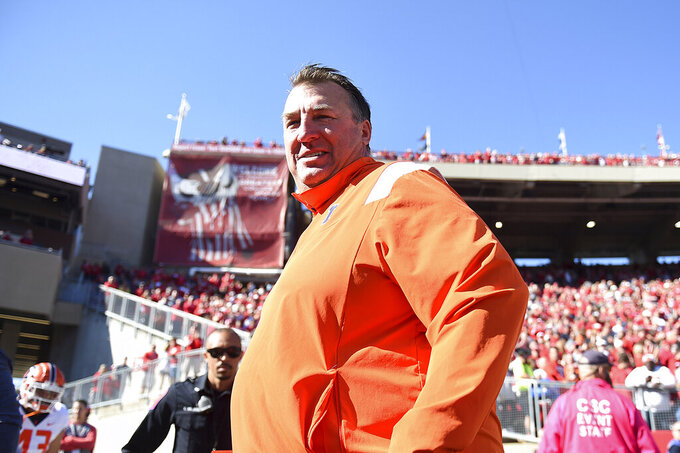 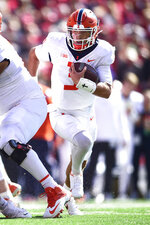 Chase Brown rushed for 129 yards, Tommy DeVito had three short touchdown keepers and Illinois trounced Wisconsin 34-10 on Saturday to give the Illini their first win at Madison since 2002.

“I told them last night in a team meeting at the end, I had a feeling they were going to play well, and if we played our kind of football and played the way that I’ve seen them play and the way that we asked them to be coached, I thought we could have success,” said Bielema, who coached Wisconsin from 2006-12.

The Illini sacked Graham Mertz five times and held the Badgers to 2 yards rushing on 24 carries while handing Wisconsin its most lopsided home loss since a 48-7 setback against Penn State in 2008. This was Illinois' most lopsided win in the series since a 34-6 blowout of Wisconsin in 1988.

“This was sweet,” Brown said. “It's not a fluke. We came here expecting to win and we did.”

Illinois won with the same formula that Wisconsin has used for most of the last three decades. The Illini outrushed Wisconsin 137-2, made fewer mistakes than their opponent and were more physical on both sides of the ball.

“We definitely take it personally," Wisconsin outside linebacker C.J. Goetz said. "This program was built on physicality.”

Bielema had gone 68-24 in seven years as Wisconsin’s coach before leaving for Arkansas at the end of the 2012 regular season. He was fired at Arkansas in 2017 after going 29-34 and took over Illinois’ program in December 2020.

The Badgers won 24-0 at Illinois last season, but this was the first time Bielema had faced Wisconsin at Camp Randall Stadium. Bielema said he received a game ball from athletic director Josh Whitman after the victory.

Bielema was the first coach to take an opposing Big Ten team to a school he coached to a Big Ten title since John Pont coached Northwestern in a 1973 game at Indiana. Pont had led Indiana to a share of the 1967 Big Ten crown.

Wisconsin fans gave Bielema a smattering of boos when his name was announced in the pregame introductions, though the stands were less than 20% full at that point, about half an hour before the 11 a.m. kickoff.

A much larger crowd showed significantly more displeasure as the Badgers got dismantled for a second straight week. Wisconsin (2-3, 0-2) was coming off a 52-21 loss at No. 3 Ohio State.

“Something needs to change because that's not us," Wisconsin safety John Torchio said. “That's not the Wisconsin football we all know.”

Illinois took a 14-10 halftime lead by scoring a pair of touchdowns after intercepting passes in Wisconsin territory. The Illini broke the game open by outscoring Wisconsin 17-0 in the third quarter, including a 49-yard touchdown run by Brown.

Illinois held Wisconsin to its lowest single-game rushing total since 2015, when the Badgers had minus-26 yards on 26 carries in a 13-7 loss to Northwestern.

“I knew if we wanted to have a chance, we couldn't let them run the football on us like we did a year ago,” Bielema said. “I bet (defensive coordinator) Ryan Walters, from last year at the end of the season to where we are now, I bet you there hasn't been a day gone by where he hasn't watched that film from a year ago."

Mertz went 4 of 4 for 54 yards on the game's opening possession and capped the series with a 21-yard touchdown to Isaac Guerendo on third-and-8. But he was just 13 of 28 for 152 yards with two interceptions the rest of the way and played the last 2 1/2 quarters with tape around his left (non-throwing) hand.

“Everyone’s got to own it,” said Wisconsin coach Paul Chryst, who was an offensive coordinator on Bielema’s Wisconsin staff from 2006-11. “Everyone’s a part of this whole deal, so we’ve all got to be part of the solution.”

Illinois: The Illini established themselves as possible contenders for the Big Ten West title. llinois hosts Iowa and No. 21 Minnesota the next two weeks in games that could determine how much of a factor they are in that race.

Wisconsin: The Badgers have to start asking themselves some difficult questions about the direction of their program as they've fallen below .500 after opening the season in the AP Top 25. Wisconsin's offense was hurt by injuries that knocked tight end Hayden Rucci, Guerendo and wide receiver Keontez Lewis out of the game.

Wisconsin: At Northwestern on Saturday.

This story has been corrected to show that Keontez Lewis, not Skyler Bell, was the injured Wisconsin receiver.