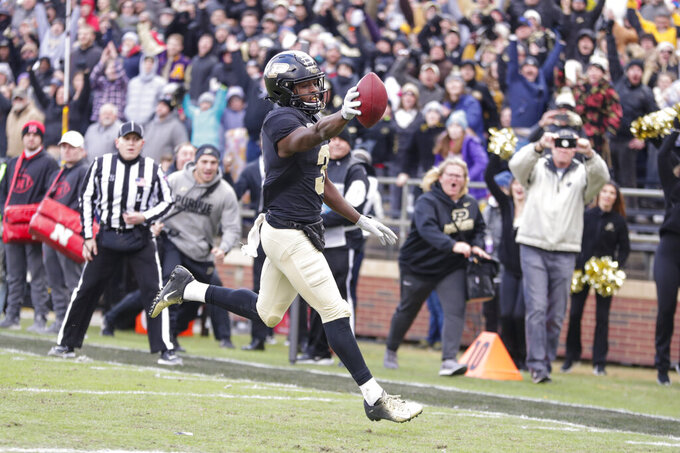 Purdue quarterback Jack Plummer is expected to miss the rest of this season with a broken right ankle. The opening-day starter, Elijah Sindelar, is unlikely to return because of a broken left collarbone.

"He's a guy I think can execute the offense. I think he'll stand there and try to make the throw and sit in that pocket and do the best he can," Brohm said Monday. "We've got to play to his strengths and help him get into rhythm and get completions. I think extending the play and getting yards with his feet is not his strength."

They must win their final three games to become bowl-eligible, a stretch run that begins Saturday with what appears to be a winnable game at reeling Northwestern (1-7, 0-6). Then, after a second bye week, the Boilermakers visit No. 16 Wisconsin before closing out the season at home against surging rival Indiana.

Purdue is 0-3 on the road this season and has lost six of its last seven outside West Lafayette. The more obvious obstacle: Mounting injuries.

While Brohm declined to completely rule out Sindelar's return this season and said Plummer was seeing a doctor Monday to determine whether he needed surgery, there are plenty of other injury concerns.

Starting receivers Rondale Moore and Jared Sparks, Brohm said, are not expected to return this week and he ruled out starting linebacker Cornel Jones, who has been trying to come back from a leg injury. Moore, an All-American last season, hasn't played since injuring his left hamstring on the same play Sindelar got hurt against Minnesota on Sept. 28. Sparks has an undisclosed injury.

Without the proven veterans, though, youngsters such as receiver David Bell, a true freshman, and Plummer, a redshirt freshman, have demonstrated what they can do.

On Monday, running back King Doerue kept the Big Ten freshman of the week award in West Lafayette for the third time in four weeks after producing 102 total yards and scoring twice in Saturday's victory over Nebraska. Bell earned the honor in back-to-back weeks in October.

O'Connell, a sophomore, could be next with his first career start looming. He'll be backed up by junior Danny Carollo, who has logged more punts than passes since arriving on campus, while the No. 3 spot is anybody's guess.

"Jared Sparks has been out, so he's not up for it," Brohm said. "There are some other guys we probably could play, but they are not ready, as well. So we've got to put some thought into it and we have a few candidates but we're still trying to weed our way through it."

But after watching the short-handed Boilermakers rally from a 10-point first-quarter deficit against Nebraska, behind O'Connell, to salvage their fading postseason plans for at least one more week, well, Brohm felt like it was a solid start.

"I think it was good to see our team fight and find a way to win in the last game, a close game," Brohm said. "Definitely not everything went perfect throughout the game but we played to the end, and numerous guys stepped up when they had to and that's good to see. That's kind of how we're going to have to find a way to win this year — just playing hard, playing together."