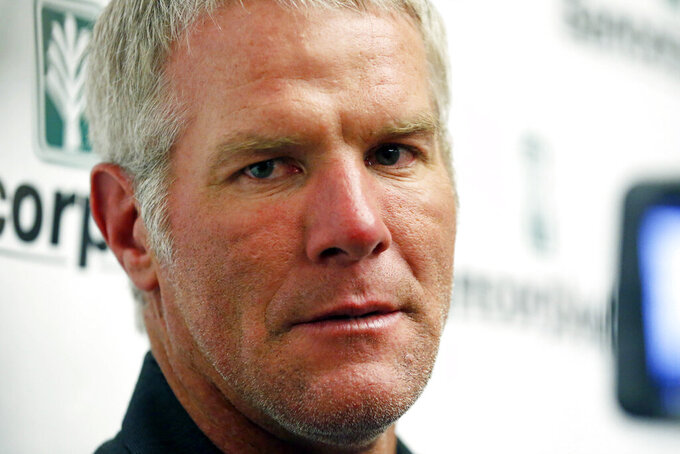 FILE - Former NFL quarterback Brett Favre speaks with reporters prior to his induction to the Mississippi Hall of Fame in Jackson, Miss., Saturday, Aug. 1, 2015. Mississippi's largest public corruption case in state history, in which tens of millions of dollars earmarked for needy families was misspent, involves a number of sports figures with ties to the state — including NFL royalty Brett Favre and a famous former pro wrestler. (AP Photo/Rogelio V. Solis, File)

JACKSON, Miss. (AP) — Retired NFL quarterback Brett Favre says he is being treated unfairly in news coverage of a Mississippi welfare scandal, including about payments he received to help fund a pet project of his — a volleyball arena at the university he attended and where his daughter was playing the sport.

“I have been unjustly smeared in the media,” Favre said in a statement to Fox News Digital, which was published Tuesday. “I have done nothing wrong, and it is past time to set the record straight.

“No one ever told me, and I did not know, that funds designated for welfare recipients were going to the University or me," Favre said. “I tried to help my alma mater USM, a public Mississippi state university, raise funds for a wellness center. My goal was and always will be to improve the athletic facilities at my university.”

It is one of the few public statements Favre has made about Mississippi's largest-ever public corruption case involving the misspending of tens of millions of dollars in welfare money that was intended to help some of the poorest people in one of the poorest states in the U.S.

Favre is not facing criminal charges. He is among more than three dozen people or companies being sued by the Mississippi Department of Human Services.

Mississippi Auditor Shad White, a Republican who has investigated the welfare misspending, took exception with Favre's new statement. White pointed to text messages between Favre and other people about the volleyball arena, recently disclosed in the civil lawsuit.

“Obviously, Mr. Favre knew that he was being paid in government funds, based on the texts,” White told The Associated Press on Tuesday. “He knew that those funds were coming from the Department of Human Services. He’s obviously acknowledged that he needed to repay those funds, too."

The lawsuit was filed in May and says the defendants “squandered” more than $20 million from the Temporary Assistance for Needy Families anti-poverty program.

Favre has repaid $1.1 million he received for speaking fees from the Mississippi Community Education Center, a nonprofit group that spent TANF money with approval from the Department of Human Services. But, White said Tuesday that Favre still owes $228,000 in interest.

In October 2021, Favre and White engaged in a social media spat about White saying Favre had accepted the $1.1 million but had failed to show up for speaking engagements.

“Of course the money was returned because I would never knowingly take funds meant to help our neighbors in need, but for Shad White to continue to push out this lie that the money was for no-show events is something I cannot stay silent about,” Favre wrote.

White said Tuesday that Favre has repeatedly made “confusing” statements about the payment for speaking.

“The contract that justified the payment to him for $1.1 million required him to show up and give speeches, and he didn’t give the speeches,” White said. “If he’s arguing that that contract is a sham, he can’t be paid $1.1 million on a nonexistent contract. He still has to pay the money back.”

The director of the nonprofit, Nancy New, pleaded guilty in April to charges of misspending welfare money, as did her son Zachary New, who helped run the center. They await sentencing and have agreed to testify against others.

In a Sept. 12 court filing in the civil lawsuit, an attorney for the Mississippi Community Education Center released several text messages about $5 million in welfare money that went toward the volleyball facility. The messages were between Nancy New and Favre, between Favre and former Mississippi Gov. Phil Bryant and between Bryant and New. The messages were from 2017 to 2019, when the Republican Bryant was still governor.

That court filing said the nonprofit center agreed to pay Favre $1.1 million “for a few radio spots” to help fund the volleyball arena, which was also being called a campus wellness center. Favre had agreed to lead fundraising efforts to build the facility on the Hattiesburg campus.

According to court documents, Favre texted New on Aug. 3, 2017, about the payment to him for speaking: “If you were to pay me is there anyway the media can find out where it came from and how much?”

New responded: “No, we never have had that information publicized. I understand you being uneasy about that though. Let’s see what happens on Monday with the conversation with some of the folks at Southern. Maybe it will click with them. Hopefully.”

The next day, New texted Favre: “Wow, just got off the phone with Phil Bryant! He is on board with us! We will get this done!”

Favre played football at the University of Southern Mississippi before going to the NFL in 1991. His daughter began playing on the school’s volleyball team in 2017.

Favre said in the statement to Fox News on Tuesday that state agencies provided money to Mississippi Community Education Center, which then gave money to the University of Southern Mississippi “all with the full knowledge and approval of other State agencies,” including the board that governs Mississippi's eight public universities, the governor's office and the attorney general's office.

News outlets have previously reported involvement by the state college board, the governor's office and the attorney general's office in approval of money for the volleyball arena.

“I was told that the legal work to ensure that these funds could be accepted by the university was done by State attorneys and State employees," Favre said.