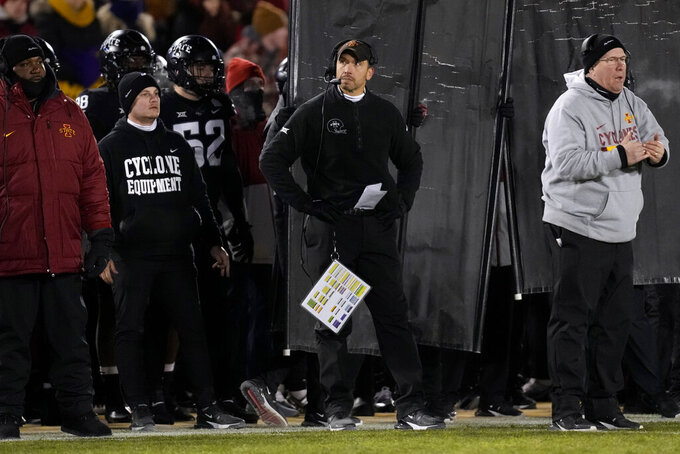 AMES, Iowa (AP) — Iowa State offensive coordinator Tom Manning and strength and conditioning coach Dave Andrews will not return next season after the Cyclones finished 4-8 and last in the Big 12.

“Decisions such as these are never easy because of the impact they have on the lives of individuals and their families, however, in order for us to move the program forward, I felt it necessary to make these changes at this time.” coach Matt Campbell said Friday. “Tom and Dave are tremendous men who have had a hand in our success over the last few years, and we wish them and their families all the best in the future.”

Iowa State went 1-8 in the Big 12 while ranking last in scoring average (20.2 points) and rushing yards per game (108). Quarterback Hunter Dekkers still passed for more than 3,000 yards and wide receiver Xavier Hutchinson led the league in catches (107) and yards (1,107) and is a finalist for the Biletnikoff Award.

Manning was in his second stint with the Cyclones. He was the offensive coordinator and offensive line coach from from 2016-2017. He left for one season in the NFL before returning to Iowa State in 2019. Andrews was the director of football strength and conditioning the past three seasons.

The school's announcement said Campbell is doing a “top to bottom” review of the program after its first losing season since 2016.