Chicago trio bolsters Cyclones for '18-19 and beyond 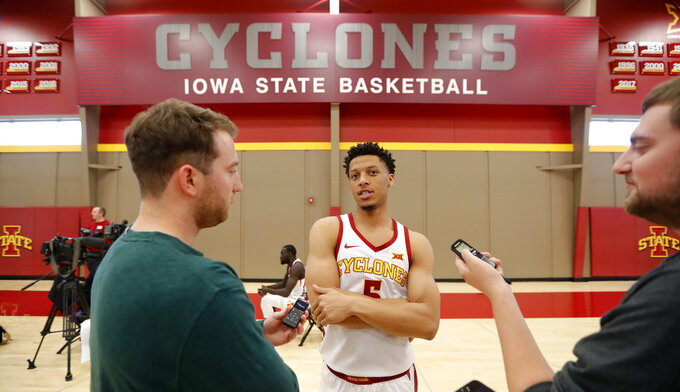 AMES, Iowa (AP) — Chicago dealt Iowa State a major blow a few years ago when the Bulls hired coach Fred Hoiberg, then known as "The Mayor" in Ames.

Cyclones fans might warm up to the Windy City when they see the talent that Hoiberg's successor, Steve Prohm, has brought in from the basketball hotbed of the Midwest.

Four-star wings Talen Horton-Tucker and Zion Griffin and three-star center George Conditt IV — all friends from the Chicagoland area — are expected to give the Cyclones (13-18 in 2017-18) a major boost. The season opener is Nov. 6 against Alabama State.

The rookie trio joins point guard Tyrese Haliburton, who is practicing despite a mild recurrence of mononucleosis, to form one of the more impressive recruiting classes in recent Iowa State history.

"The freshmen have been great," Prohm said. "It's the first time I've ever coached freshman that, they all knew each other. So I think is helping chemistry as well ... (and) I really like all those guys. I like their character. I like what they're about. They understand what this program is about. "

The headliner of the trio is Horton-Tucker, a standout at Chicago's Simeon High who rewarded Iowa State for being one of the first major schools to offer him a scholarship. At 6-foot-4 and 230 pounds, the broad-shouldered Horton-Tucker hardly looks like a kid who won't turn 18 until just after Thanksgiving.

Horton-Tucker's offer sheet included Kansas, Michigan State, Ohio State, Purdue and others, and he's considered a versatile perimeter player who can be a shooting guard or even a power forward.

Prohm wouldn't commit to calling Horton-Tucker a starter at Thursday's media day, instead saying that Horton-Tucker will have an opportunity for extended playing time as soon as the opener.

"His biggest thing is 'Hey coach, what can I do to have a big role on this team?'" Prohm said. "He's got big dream and big goals."

The 6-foot-6 Griffin, who averaged 21.1 points and 9.0 rebounds for Hinsdale South High as a senior, is back at practice after dealing with an MCL tear in his knee that cost him most of the summer.

Griffin might be a candidate to redshirt after falling so far behind. But his knee issues aren't as serious as the Iowa State staff thought they might be, and Griffin just might have the talent to crack Prohm's typically tight rotation after being ranked as a top-100 recruit.

Griffin said the existing bond that he, Horton-Tucker and Conditt brought with them from home have allowed the Chicago guys to focus more on getting close to their new teammates.

"We just went out of our way to talk to the other guys and build good relationships with them because we already have our relationships," Griffin said.

The 6-foot-10 Conditt, whose father played football at Iowa State in the early '90s, might also redshirt this season since he's behind frontcourt starters Cam Lard and Solomon Young and 6-foot-9 Nebraska transfer Michael Jacobson, who started 31 games in his final season in Lincoln as a sophomore.

Listed at just 208 pounds, Conditt also looks as though he could also use a year adding some beef to hang in the Big 12. But Conditt also grew three inches from his junior to senior year, and he could be a sleeper after grabbing 17 boards a game for Corliss High.

"You throw all those stars out when you get here," Prohm said. "It's more about their background. It winning important? Do you love the game? What's your work ethic, and can you get better?"