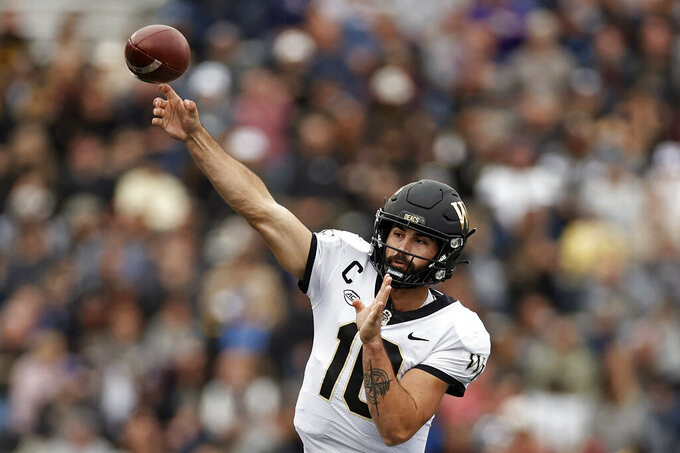 —Sam Hartman, Wake Forest, threw for a career-high 458 yards and five TDs, and the No. 16 Demon Deacons defeated Army 70-56 to remain unbeaten.

—Bryce Young, Alabama, passed for 371 yards and two TDs and ran for two more scores, carrying the No. 4 Crimson Tide to a 52-24 victory over Tennessee.

—Darius Hale, Central Arkansas, rushed for 253 yards and four TDs in a 49-38 victory over Lamar.

—Garrett Shrader, Syracuse, rushed for three TDs and threw for two, including one to Damien Alford with 19 seconds left, to lift the Orange to a 41-36 victory over Virginia Tech.

—Carlos Davis, Western Carolina, passed for a career-high 401 yards and three TDs to help the Catamounts beat The Citadel 45-31.

—Tyler Allgeier, BYU, ran for 191 yards and two TDs, and the Cougars beat Washington State 21-19 in the Cougars' first game since coach Nick Rolovich was fired for refusing to get a COVID-19 vaccination.

—Will Rogers, Mississippi State, threw for 386 yards and a career-best four TDs in a 45-6 win over Vanderbilt.

—Shedeur Sanders, Jackson State, threw for 309 yards and four TDs in a 42-12 win over Bethune-Cookman.

Over the course of an unprecedented nine overtimes, Illinois survived Penn State’s botched attempt at a trick play, lost its quarterback and a powerful running back to injury, and failed to gain just three measly yards again and again.

The Illini came out victorious in the NCAA’s first ever nine-overtime game, edging the seventh-ranked Nittany Lions 20-18 on Washington’s 2-point conversion catch from Brandon Peters to end a string of goal-line stalemates under college football’s recently rewritten overtime rules.

Penn State tried to win it then and there with a variation of the famed “Philly Special” play the Eagles used to win Super Bowl LII. Quarterback Sean Clifford — still suffering from an unspecified injury sustained Oct. 9 against Iowa — was wide open near the goal line on the trick play, but tight end Tyler Warren’s pass attempt missed its mark.

4_Interceptions in the fourth quarter by Indiana State in a 28-17 win over Youngstown State.

72_Wins by San Diego coach Dale Lindsey, breaking a tie with Brian Fogerty for most in school history.

1,025_Career rushing yards by Cal's Chase Garbers, breaking Joe Kapp's school record of 931 for most by a quarterback.

Iowa State is back in its familiar October form and right in the thick of the Big 12 race again.

Brock Purdy threw for 307 yards and two touchdowns, the defense stopped Oklahoma State inches short on a fourth-and-2 late in the game, and the Cyclones beat the No. 8 Cowboys 24-21.

The Cyclones won their third straight to improve to 16-2 in October since 2017, and they won their ninth Big 12 home game in a row, the longest streak of its kind in the league.

Oklahoma State saw its eight-game win streak end and lost in Ames for the first time since 2011.