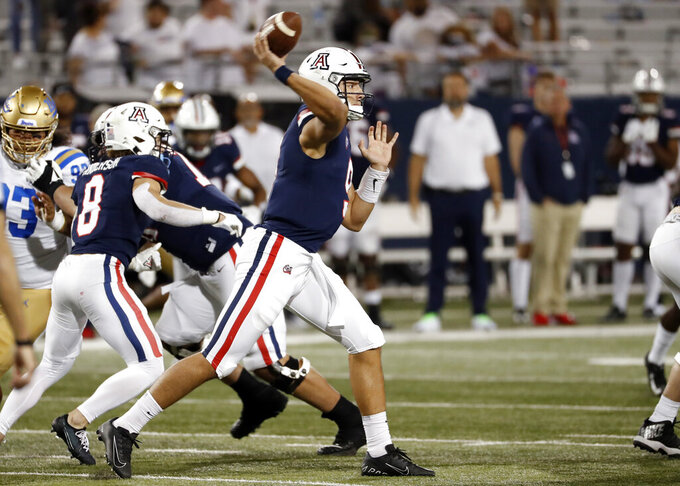 The battered and bruised Colorado Buffaloes got a break at just the right time.

Stumbling since a season-opening rout of Northern Colorado, the Buffaloes got a bye week to heal up and shake off a four-game losing streak.

When they look across the field on Saturday, they'll see a team with some of the same problems, only over a much longer period.

“This team is getting better from the start of their season to where they are now, in a lot of ways,” Colorado coach Karl Dorrell said. “They mirror the issues we have dealt with having a lot of new players playing.”

The Wildcats (0-5, 0-2) are on a school-record 17-game losing streak — longest in the nation — that dates to a 35-30 win at Colorado on Oct. 5, 2019. Arizona has played better in recent weeks, keeping No. 9 Oregon and UCLA close until the fourth quarter before losing.

The Wildcats' problem has been finishing — drives and games.

Arizona scored one touchdown in six trips across midfield in last week's 34-16 loss to UCLA and, worse yet, lost starting quarterback Jordan McCloud to season-ending ankle and knee injuries.

The Wildcats now turn back to Gunner Cruz.

The redshirt freshman won a three-way battle with McCloud and Will Plummer coming out of fall camp, and had a solid first start in the opener against BYU, throwing for 336 yards. Cruz wasn't as sharp the next week against San Diego State, throwing for 70 yards — 43 on one play — and was replaced by Plummer the next week.

“Gunner won the starting job in training camp because of the way he can throw the football,” Arizona coach Jedd Fisch said. “Now, reverse course, go back to that BYU week of preparation, remind him why he won the job and some of the good things he did against BYU.”

Don't expect a lot of scoring in Saturday's game.

Of course, the Buffaloes are 61st in scoring defense and Arizona is 105th, so maybe this is the game one if not both get their offenses going.

Colorado's injury-plagued offensive line could get a boost this week with the potential return of tackle Max Wray. He suffered a concussion against Minnesota on Sept. 18 and missed the next two games.

Wray passed protocol and returned to limited practice this week, so he might be available Saturday.

The Buffaloes have used four different starting line combinations in five games due to injuries, so they could use him.

The Wildcats aren't nearly as good against the run, ranking 122nd nationally and gave up 329 to UCLA last week.