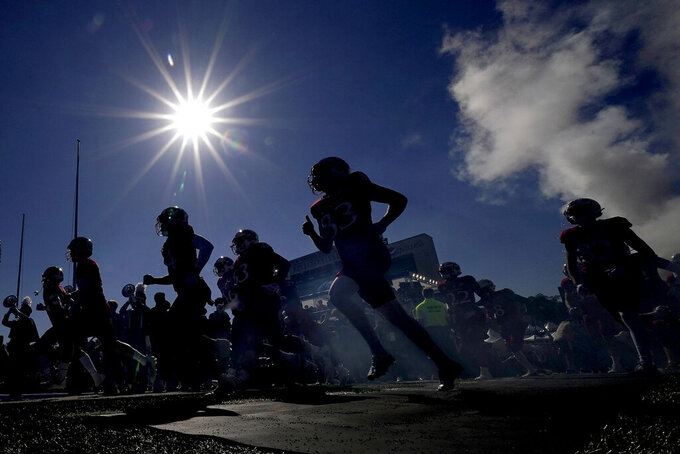 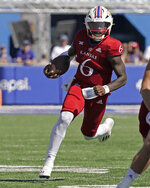 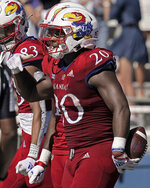 It is the first time since 2009 the Jayhawks have started 4-0. They also completed their first undefeated nonconference schedule since 2013.

“It feels amazing to be 4-0,” Daniels said. “To see the amount of excitement in the locker room and in the stadium, we love it."

Daniels went 19-of-23 passing for 324 yards and a career-high four touchdowns. He led the team in rushing with 83 yards and a score.

“Jalon had another great performance,” Kansas head coach Lance Leipold said. “He doesn’t get rattled. ... He put the ball where he needed to, threw into some tight windows and made some plays with his legs. He just doesn’t let the moment get to him."

The Kansas offensive line should get credit for the performances of their backfield this early in the season. The line gave up one sack today, its first this season.

The Jayhawks led 21-13 at halftime thanks to three touchdown passes from Daniels.

Kansas went 3-for-4 in the red zone, getting receiving touchdowns from Luke Grimm and Trevor Kardell and Daniels a rushing score. The Jayhawks entered play leading the Big 12 in red zone offense where they are 22 of 24 with 20 touchdowns.

Lawrence Arnold scored on a 36-yard pass play and Daniel Hishaw scored on a 73-yard run when he spun out of a tackle and sprinted the end zone. The Jayhawks outgained Duke 529-463 yards offense.

“Hats off to Kansas,” Duke head coach Mike Elko said. “I thought they did a great job today and earned the victory and gave us a hard time with what they did on offense. We got ourselves out of a hole and had a chance to tie, but we’re not looking for moral victories around here.”

Riley Leonard went 24-of-35 passing for 324 yards, including a 24-yard score to Jalon Calhoun. Jaylan Colman and Jordan Waters scored rushing touchdowns for the Blue Devils (3-1).

Duke: The Blue Devils entered the contest leading the nation in fumble recoveries. The Duke defense tried to punch the ball out rather than wrapping up in the open field, which allowed the Jayhawks to get extra yardage after contact. The offense struggled to execute on third down, going 5 of 15.

Kansas: The Jayhawks continued to prove its offensive weapons are legit and were efficient in the red zone.

The Jayhawks entered the contest receiving votes and could enter the Top 25 next week. Kansas, a basketball powerhouse, won the men's national championship last April.

Kansas announced a sellout at 47,273-seat David Booth Kansas Memorial Stadium. It is the first sellout since Nov. 2, 2019, and the second in 13 years. It was also the first win for the Jayhawks in a home sellout since 2009 against Duke.

Duke opens ACC play at home against Virginia on Saturday.