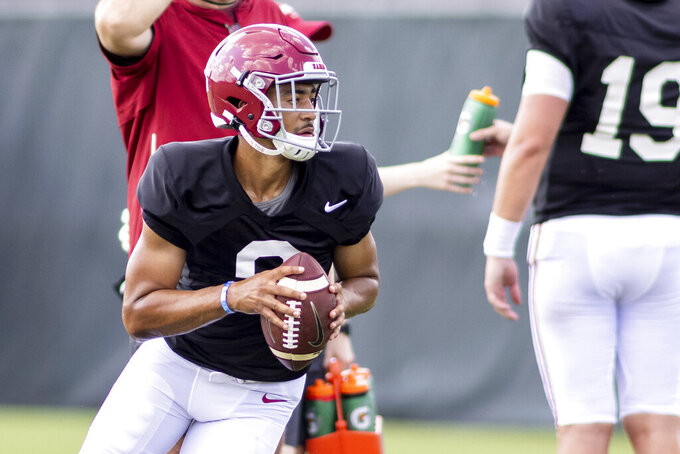 Line: Alabama by 19 1/2, according to FanDuel Sportsbook.

Alabama is seeking a 20th consecutive season-opening win. It has not been even a game under .500 since the end of the 2006 season, when the Tide finished 6-7. Nick Saban took over as coach the following season. For Miami, the game represents a chance for arguably the program’s biggest win in 20 years.

Alabama's defense against a Miami offense led by QB D'Eriq King and a veteran offensive line with a collective 159 career starts. The Hurricanes returned 10 offensive starters. The Crimson Tide is led defensively by preseason All-American Will Anderson Jr. and fellow linebackers Christian Harris and Henry To'oTo'o, a Tennessee transfer. Alabama had 21 sacks in the final five games last season.

Miami: King enters the season with 9,570 career combined passing and rushing yards. Among active FBS quarterbacks with at least 1,000 rushing yards, only Utah transfer Charlie Brewer — who had 10,739 over the past four seasons at Baylor — has piled up more than King.

Alabama: QB Bryce Young, the top-rated dual threat quarterback out of high school, makes his much-anticipated starting debut. If the offense skips a beat, it won't necessarily be because of his inexperience. Young is surrounded by new starters on an offense, though tailback Brian Robinson Jr. and receiver John Metchie III are established threats.

Alabama is seeking a 99th win as the No. 1-ranked team in the AP poll. ... Miami is 5-11 all-time when facing the AP national champion from the previous season, 0-2 when that opponent is Alabama (losing those games by a combined score of 66-3). ... Saban is 79-8 in games where the Crimson Tide enter ranked No. 1 in the AP poll. ... The Hurricanes are 9-9 all-time when facing the AP’s No. 1-ranked team. ... Miami will play nine of its 12 regular-season games in NFL stadiums, including seven home contests. ... Alabama has 15 first- or second-year players on its offensive two-deep, including three offensive linemen and all four freshman wide receivers.