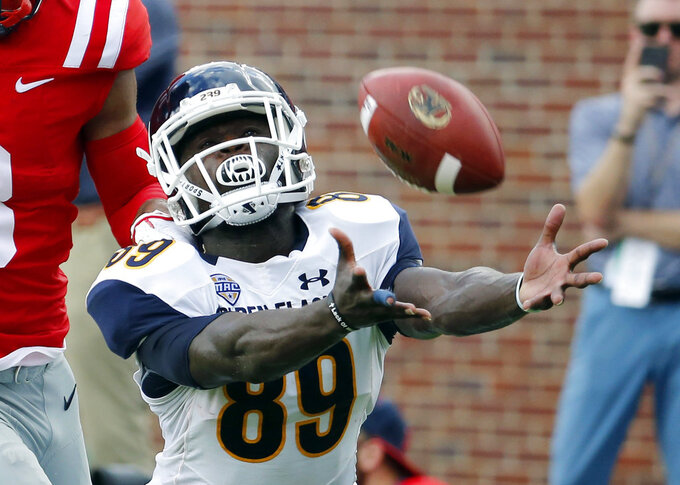 The new award recognizes college football players from FBS, FCS and lower divisions who overcome injury, illness or other challenges to return to the field. The winners were chosen by the College Sports Information Directors of America in association with The Associated Press.

Mayo Clinic will donate $5,000 each to the general scholarship funds at Kent State, Dartmouth and Carson-Newman in the names of the winners.

Thirty players from all levels of college football were nominated for the award. Dixon, the FBS winner, and Simmer, the FCS winner, were selected in a vote of AP college football poll voters. Wimbush was selected by COSIDA's small-college advisory board.

Dixon was diagnosed with a rare blood disorder, aplastic anemia, in high school. He was able to earn a scholarship and have a productive freshman season at Kent State in 2015, but the medication he was using to curb fatigue and frequent flu-like symptoms eventually was not enough. Doctors told him he would need a bone marrow transplant, which he underwent April 2017. Dixon missed two seasons, but returned to school and the team in 2018.

This season, Dixon played in every game and the 5-foot-8, 178-pound receiver led the team with 52 receptions for 532 yards and two touchdowns for the Golden Flashes.

"I want to thank God for guiding me through my struggles and blessing me with another day on Earth. I want to thank my mother and father and whole support system," Dixon said "This means the world to me and my family and I appreciate everyone who has supported me and sent out prayers to me while I was going through my tough times."

Simmer was diagnosed after his freshman season in 2016 with a brain tumor that was causing him to go deaf in his left ear. He had surgery to remove 90 percent of the tumor in the summer for 2017 and needed to relearn how to walk and balance himself. He came back to school in the 2018 winter semester and worked his way back into playing shape. This season, the 285-pound sophomore had 11 tackles for Big Green, including a sack for a safety and a fumble recovery against Princeton.

Simmer had his surgery done at the Mayo Clinic in Rochester, Minnesota.

"I would like to thank everyone that supported me through this entire process including my family, friends, and the entire Dartmouth community from my teammates and their families to the coaches, training staff and administration," Simmer said. "Their constant support allowed me to push myself to the limit during my recovery and obtain my goals."

Wimbush tore his ACL in the second game of the 2017 season, but after an aggressive rehabilitation he was ready to start the 2018 season. Wimbush ran for 1,206 yards to lead the Division II South Atlantic Conference. He averaged 8.0 yards per carry, second in Division II.

"It was an honor to be mentioned as a nominee back in September," Wimbush said. "My story doesn't compare to those guys and it is truly eye opening to see everything they've overcome and an honor to be considered a winner with them. I feel truly blessed to receive this."

Dixon, Simmer and Wimbush will be honored on the field during the Fiesta Bowl on Jan. 1 in Glendale, Arizona, when No. 7 UCF faces No. 11 LSU.