FCS playoffs: When will defenses assert themselves? 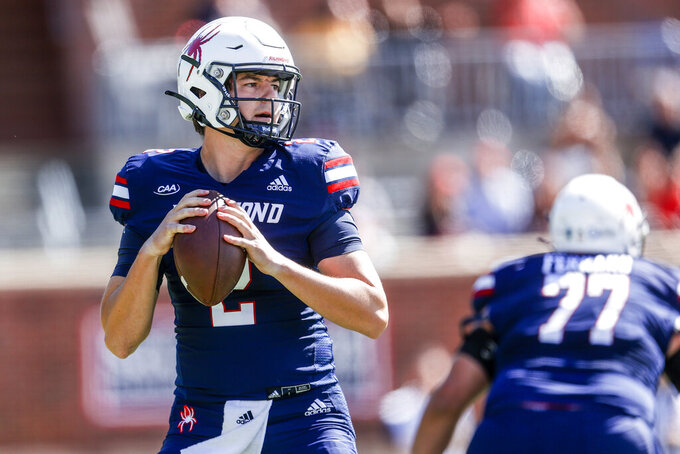 Gaudy offensive numbers continue to be the rule rather than the exception as the Football Championship Subdivision playoffs head into quarterfinals weekend.

It begs the question: If defense really does win championships, when is it going to show up?

Only two schools had notable defensive performances in the second round: Top-seeded South Dakota State and fifth-seeded William & Mary, which also had the most lopsided wins. The Jackrabbits beat Delaware, 42-6, while William & Mary beat Gardner-Webb, 54-14.

South Dakota State limited the Blue Hens to 192 yards a week after Delaware scored 56 points against St. Francis (Pa.). William & Mary forced six turnovers, but also piled up 608 yards in its victory against the Runnin' Bulldogs, who scored 52 points a week earlier.

Otherwise, offense has ruled the day.

The fifth-seeded Tribe, making their first playoff appearance since 2015, play next at No. 4 Montana State (11-1), which gained 554 yards in a 33-25 victory against Weber State.

Samford, in the playoffs for the first time since 2017, gained 542 yards in its 48-42 overtime victory against Southeastern Louisiana. The Bulldogs face defending national champ North Dakota State, hich gained 453 of its 511 yards on the ground in a 49-26 victory against Montana, including scoring runs of 68, 75, 68 and 73 yards.

Holy Cross, in the quarterfinals for the first time since 1983, ran for 320 yards and four touchdowns in its 35-19 victory over New Hampshire. The Crusaders average 38 points and will head west to face South Dakota State.

“Offenses are different, personnel is different. Is this going to be a great challenge? Yes, for our defense," Jackrabbits coach John Stiegelmeier said.

Adding to the challenge is that the Crusaders' leading rusher is quarterback Matthew Sluka, with 1,021 yards and 10 touchdowns.

“As a D-coordinator. I thought they should have, you know, made running the quarterback illegal because it’s hard to defend,” Stiegelmeier joked.

Through 16 games and two rounds, Gardner-Webb is the only road team to have won a game in the playoffs and William & Mary dispatched them easily in the second round.

The Tribe is 6-0 on the road and coach Mike London hopes that breeds confidence against last year's runner-up, Montana State. The Bobcats have won 19 straight at home.

“When you go this far, you want to go all the way, you want to be all in. Our guys have been all in since we started the season, but particularly coming out of this past game with Gardner-Webb,” London said.

Samford faces a similarly daunting challenge at North Dakota State. The Bison have won nine of the last 11 national championships, boast a 42-3 record in the playoffs and are in their FCS-record 13th consecutive quarterfinals round; Samford is in its second quarterfinal.

“When you think FCS football, North Dakota State comes to mind and you know, we’re a find-a-way group,” said Bulldogs coach Chris Hatcher, whose team has won its last two games in overtime. “We’re excited about playing. We’re not going to back down from anybody.”

Three of the quarterfinal games will be broadcast on an ESPN network on Friday, as will Saturday's game between South Dakota State and Holy Cross.

Stiegelmeier hopes his team is excited for the rare opportunity, but hopes they aren't thinking about the national audience come game time.

“But is it good for our university?” the coach asked. “Without a doubt. It’s the best advertising we can purchase.”

Samford's Chris Hatcher is one of three coaches left in the playoffs who has won a national championship. He did it at Valdosta State in 2004. William & Mary's Mike London won at Richmond in 2008, and Matt Entz of North Dakota State has won two (2019, 2021).