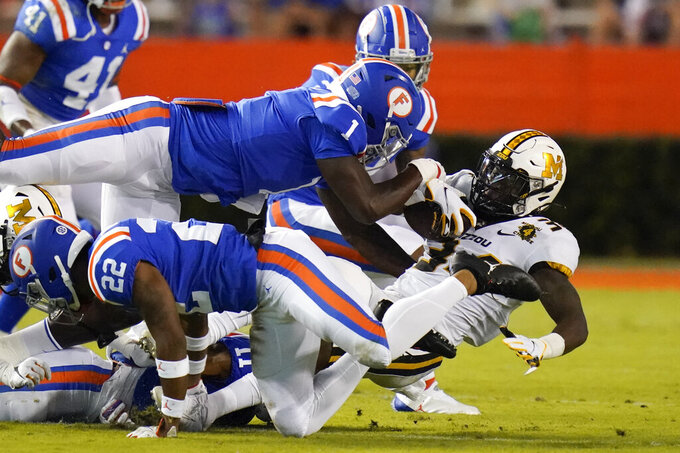 Missouri running back Larry Rountree III, right, is stopped by the Florida defense, including linebacker Brenton Cox Jr. (1) and defensive back Brad Stewart Jr., back, during the first half of an NCAA college football game Saturday, Oct. 31, 2020, in Gainesville, Fla. (AP Photo/John Raoux)

Counting down the days? Circled on the calendar? No one knows for sure because Cox turned down multiple interview requests this week in an attempt to avoid the spotlight. But the Florida linebacker made his feelings clear last month when he said facing Georgia would “definitely be personal.” He also vowed to get a victory against his former team.

The eighth-ranked Gators (3-1) expect Cox to be at his best against the No. 5 Bulldogs (4-1) on Saturday in Jacksonville, a Southeastern Conference rivalry that likely will determine the East Division and who advances to the league title game next month. Florida has lost three straight in the series.

"The World’s Largest Outdoor Cocktail Party” won’t have the same fanfare as usual. Each school got 9,000 tickets — well shy of the 85,000 fans who usually cram into reconfigured TIAA Bank Field — and tailgating has been banned in stadium parking lots.

None of that matters to Cox, a five-star recruit from Stockbridge, Georgia, who picked the Bulldogs over more than two dozen other schools, including powerhouses Alabama, Clemson and Ohio State.

He played in 13 games as a freshman in 2018 and even started the Sugar Bowl against Texas. He finished with 20 tackles, including six against the Longhorns, and appeared poised to be the next great defender to come out of Athens.

But he was arrested on a misdemeanor charge of marijuana possession in April 2019 and abruptly left the team four months later. He spent a few days in the NCAA transfer portal before landing in Gainesville.

Florida coach Dan Mullen was hopeful Cox would get an NCAA waiver that would have allowed him to play right away. But the request was denied, forcing Cox to sit out the 2019 season under NCAA transfer rules.

“He ended up being on the scout team,” Mullen said. “Had a great attitude, worked his tail off and all the work he put in last year not being able to play is showing this year.”

Cox handled it as well as could be expected.

“Sitting on the sideline was definitely hard for me because I’ve never done that before,” he said. “I had a lot of faith in Coach Mullen. But some things just don’t work out the way we planned. I’m just ready to go now.”

Cox has started every game for Florida this season, the first three out of position. With defensive tackle Kyree Campbell returning from a suspension last week against Missouri, it allowed Zach Carter to move back to defensive end and Cox to his more natural spot at outside linebacker.

He finished with five tackles against the Tigers, including one for a loss, to go along with three quarterback hurries and a fumble recovery that helped turn the game in the second quarter.

Cox is second on the team with 21 tackles and leads the Gators with two sacks. Facing Georgia, though, could raise his game to new heights.

“I feel like he knows he has something to prove and he wants to show his old team what he’s been doing, who he is,” Florida receiver Trevon Grimes said. “Just from seeing that, I know it’s going to be a big game for him, a big game for us, a big game for the team, and we’re looking forward to going out there and showing Georgia what we can do and who we are.”

The Gators weren’t very good defensively in their first three games but felt they turned a corner against Mizzou by allowing 248 yards, notching three sacks and forcing two turnovers.

Cox was at the center of Florida's best defensive showing since thumping Florida State last November in the Swamp.

"Brenton’s playing really well,” Georgia coach Kirby Smart said. “He’s an explosive pass rusher, really good player like he was coming out of high school. He plays really hard. He’s hard to block. … What he’s really good at is rushing the passer like all the Florida guys they’ve had over the past. …

“He’s playing really well for them. He’s playing physical. He’s playing hard. He’ll create some issues for us Saturday and we’ve got to do a good job knowing where he’s at.”

There's a good chance Cox will be the one staring, pointing and screaming at Georgia's sideline.

“You have to be able to finish and do your job. You can’t be reckless in your approach," Florida defensive coordinator Todd Grantham said. ”There’s a fine line in being aggressive and physical and not reckless. ... I certainly expect him to be a guy that plays to his ability and executes the things he needs to do to be successful."