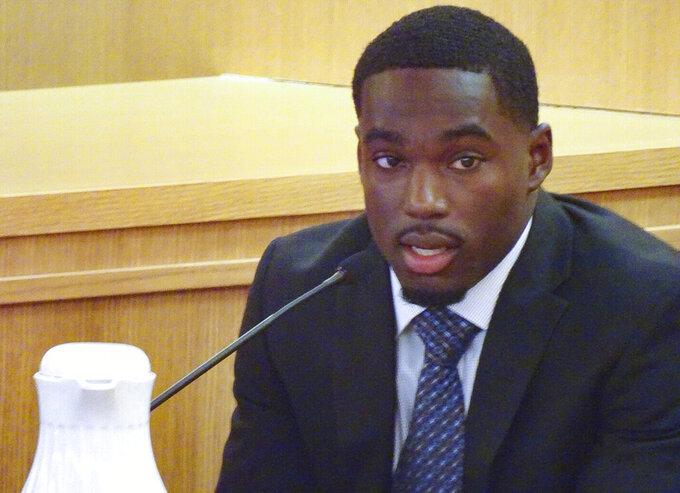 Cephus, 21, was suspended from the football team last August and was expelled from the university earlier this year for violating its non-academic misconduct code. It wasn't immediately clear how the verdict would affect his status with the school and team.

He was charged with second- and third-degree sexual assault for the alleged attack on the women, who were 18 years old when they say Cephus sexually assaulted them at his apartment last year. They testified earlier this week that they were too drunk to consent to sex.

Shortly before the case went to the jury, Cephus testified in his own defense. He said that when the women arrived at his apartment, one immediately went into his bedroom, summoned him in and removed her clothes, the Wisconsin State Journal reported. He said the other followed behind.

Cephus said he summoned his roommate and teammate, Danny Davis, into his bedroom to take a look because having sex with two women "was something I'd never done before."

He said he asked Davis to take a photo of the women, one of whom was on his bed and the other on his floor, but that angered the woman on the floor, who demanded that the photo be deleted.

"It was really dumb," Cephus said of taking the photo, and he blamed the anger that the picture caused for his legal troubles.

Cephus testified that he met the women the day they came to his place. He met one while bowling with Davis and another teammate, A.J. Taylor, who was in an on-and-off relationship with that woman. He said that at a bar that night, that woman introduced him to her friend, "and for the rest of the 20 to 30 minutes (at the bar) she was attached to me." He said he didn't see the two women drink much.

When he declined a drink because he was driving, Cephus said, one of the women told him she wanted to go to his apartment for a "sleepover."

On the way to his apartment, Cephus testified, the first woman touched him from the back seat while he was driving, and they held hands. And once there, he was soon in the bedroom with the two women.

He said the women later got into an argument, causing one of them to abruptly leave the apartment.

On cross-examination, Cephus admitted he lied to police when he said initially that he had taken the photo because he didn't want to get Davis in trouble for something he told Davis to do.

Asked whether Cephus believed the women were "plotting" against him, he testified they "could have been." He also maintained that despite saying they were intoxicated, "they knew what they were doing."

When asked whether it was Cephus' responsibility to know whether the women were sober enough to consent to sex, he replied, "They know what happened."