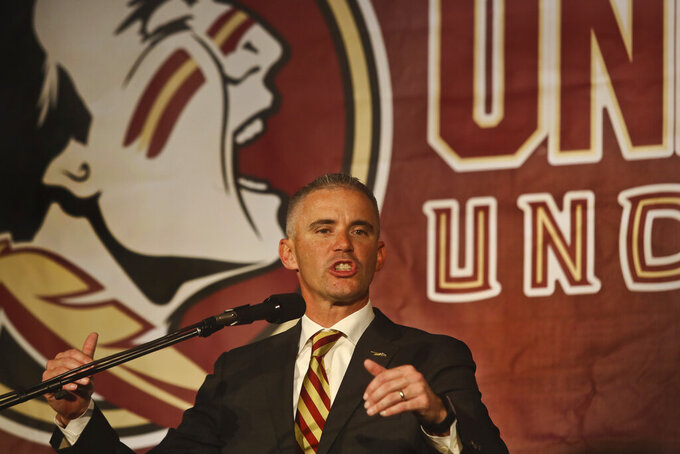 Florida State's Mike Norvell apologized Thursday after a star player accused the coach of lying about personally connecting with every football player to discuss the police killing of George Floyd and ensuing protests against racial injustice.

After a team meeting early Thursday involving players and coaches, defensive tackle Marvin Wilson, who called out his first-year coach the night before on Twitter, took to social media again to declare the matter settled.

“Took a stand we got what we wanted & we are moving forward,” Wilson wrote on Instagram. He also posted a nearly four-minute video detailing how the team plans to register to vote and raise funds for organizations that help send young black people to college and aid poor children in the Tallahassee, Florida, area.

Wilson, who is black, said Wednesday night on Twitter that he and his teammates were “outraged” by Norvell's characterization of having individually touched base with every player last weekend.

Norvell released a statement saying that was a mistake. “Particularly at this time, words are important, and I’m sorry,” he said.

Florida State athletic director David Coburn, making a scheduled appearance on a call with the school's Board of Trustees on Thursday morning, told the board about the online meeting involving the players and Norvell, who has been in the job for about six months.

“I’m told the dialogue was open and very candid and that it went well. I believe we are moving on there,” Coburn told the board.

Norvell, 38, was hired away from Memphis in December to replace Willie Taggart, who had been fired after less than two full seasons as Seminoles coach. Norvell is the fourth coach Wilson has played for during his career at Florida State, including Jimbo Fisher, now with Texas A&M, and interim head coach and current FSU assistant Odell Haggins.

The Athletic reported on Tuesday that Norvell said: " I went back and forth individually with every player this weekend," when asked what he was doing to connect with players after the death of Floyd, a black handcuffed man who died at the hands of Minneapolis police. The incident has sparked nationwide protests.

Wilson then said on Twitter that Norvell's comment was a “lie" because all players had received was a “generated text that was sent to everyone.” Wilson added he and his teammates would not be working out until further notice.

Wilson is one of the top defensive tackles in country and was a team captain last season. The 6-foot-5, 310-pound senior missed the final four games of 2019 with a hand injury that required surgery. He still led the team with 5 sacks and enters this season as a potential first-round draft pick.

Norvell said in his statement the text was sent to each player and presented as “an opportunity for open communication with me.

“Many members of our team chose to respond and have more in-depth conversations about issues and feelings,” Norvell said. "Marvin is right. It was a mistake to use the word ‘every.’”

Florida State also released the content of the message Norvell sent to each player Saturday night. It read, in part: “I know there is anger and strong feelings that come with each day and every experience but please know better days are ahead because of YOU. Be safe and please always know we are here for you as coaches and staff if you ever need to talk. You have a tremendous platform as member of our Nole Family. Let’s be different and let our actions be heard in Service, Sacrifice, and Respect."

In his Thursday post, Wilson wrote that he appreciated Norvell for encouraging him to “use his platform and speak for what me and teammates believe in.”

“Yesterday I took a stand that was not only for me or FSU football. Not even for athletes in general. It's for Big George Floyd. Black people in general for our oppression that we've been going through for over 400 years,” Wilson said in the video. “I want to say shoutout to Colin Kaepernick for really being the first athlete I ever saw to really take a stand for something that he believed in.”

Norvell said he was grateful for the opportunity to speak with the team.

“We will continue to communicate and work together to be part of the solution, making our world a better place for ALL,” Norvell said.