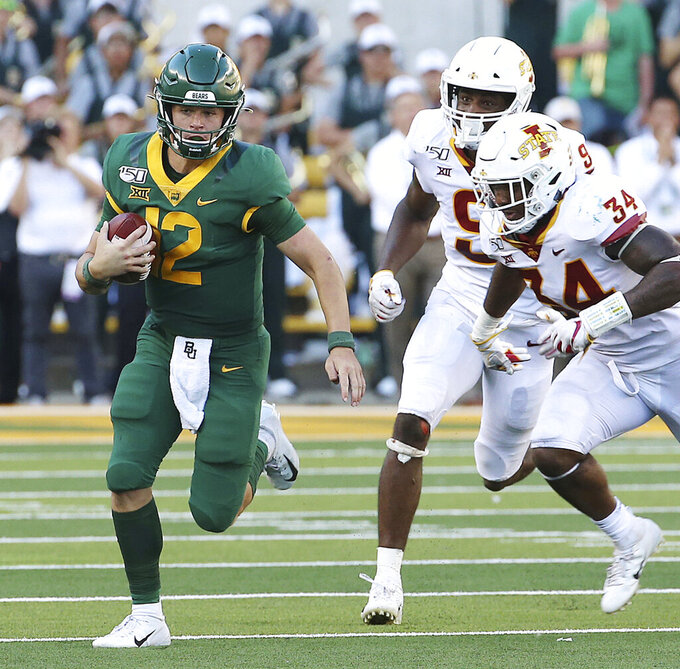 AUSTIN, Texas (AP) — Finally, the Big 12 has a full slate of conference games this weekend.

By Sunday, the league should have a pretty good idea of which teams are in the mix with Oklahoma and Texas for spots in the Big 12 championship game in December.

The No. 6 Sooners and No. 11 Longhorns remain the favorites to reach the title game, but they meet in the Cotton Bowl in Dallas on Oct. 12. The pressure will be on the winner to avoid a second loss that could jeopardize what many presume will be a rematch/replay of 2018.

It takes a deep trek into the Big 12 record book to find a conference title game that didn’t have either the Sooners or the Longhorns: It was way back in 1998 when former league member Texas A&M beat Kansas State.

The Big 12 didn’t play a championship game from 2011-2016 but in the years before, and since, it has included either Texas or Oklahoma 15 times. The Sooners have made the title game a whopping 10 times. That puts a premium on snagging that second spot. Just who will be in line to possible do that should begin to shake out this week when every game is a conference matchup.

The only matchup of Big 12 unbeatens is Texas (3-1, 1-0) at West Virginia (3-1, 1-0). The Longhorns were off last week after a tough win against Oklahoma State. The Mountaineers also had a week off after getting their first conference win for new coach Neal Brown

The Texas offense has been rolling behind quarterback Sam Ehlinger, but the defense has been badly wounded. Texas has been hardest hit in the secondary and Ehlinger may have to carry the Longhorns all season.

Texas coach Tom Herman doesn’t want the Longhorns thinking of themselves as league favorites. After beating Oklahoma in the regular season last year, Texas lost two conference games and had to scrap its way into the championship. One of those losses was to West Virginia.

“We're not far enough along in the development of our program to have any sense of enjoying prosperity,” Herman said. “It's unfathomable that anybody at this stage we're in could feel anything resembling comfortability.”

Oklahoma State, with tailback Chuba Hubbard, already has a loss to Texas, but the Cowboys have the look of a team that could hang around until the season-ending Bedlam game with Oklahoma on Nov. 30. The Cowboys (4-1, 1-1) face Texas Tech (2-2, 0-1) this week. The Red Raiders have lost two in a row under first-year coach Matt Wells and are missing injured quarterback Alan Bowman.

Iowa State (2-2, 0-1) enjoyed it first preseason ranking in 41 years and the Cyclones were a darkhorse pick for the league championship. A road loss at Baylor has them desperate to avoid an 0-2 league start when they host TCU (3-1, 1-0). The Cyclones rallied from a 20-point deficit last week at Baylor, only to lose on a game-ending field goal.

The calendar suggests it’s time for a Cyclones surge. Iowa State has won eight straight in October dating to 2017 and another mid-season run could put them back among the league favorites for the title game.

Baylor (4-0, 1-0) hasn’t enjoyed that kind of status since 2015. Last week’s win _ with a dominant defensive effort over three quarters, then a late drive for the field goal _ could be a huge step under third-year coach Matt Rhule. The university certainly likes what it has in him, giving Rhule a contract extension over the weekend through 2027.

Beat Kansas State on Saturday to reach 2-0 in conference play and the Bears will be taken seriously the rest of the way.

Kansas State (3-1, 0-1) had a perfect start under first-year coach Chris Klieman. That included an impressive road win at Mississippi State. Then came a conference-opening loss at Oklahoma State when Hubbard romped for nearly 300 yards. The loss ended a 24-game win streak dating back to 2017 for Klieman, who was at North Dakota State before taking over the Wildcats.

While the rest of the Big 12 field tries to sort itself out, Oklahoma travels to Kansas (2-3, 0-2) while getting ready for next week’s matchup with the Longhorns in Dallas. The only concern there for the Sooners and transfer quarterback Jalen Hurts should be getting out of Lawrence without any serious injuries.