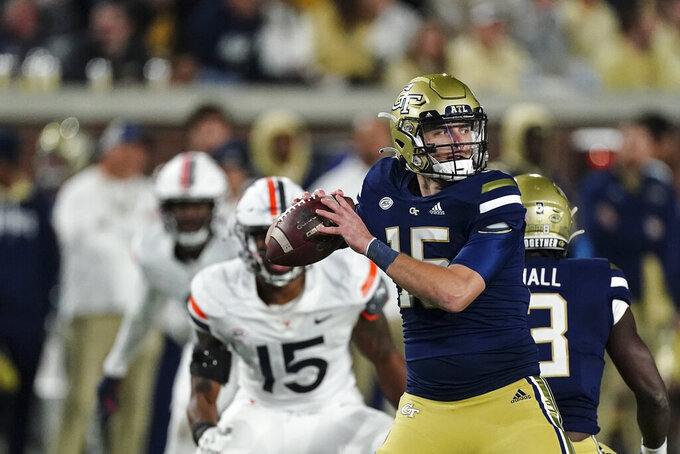 Georgia Tech quarterback Zach Gibson (15) looks for a receiver during the first half of the team's NCAA college football game against Virginia on Thursday, Oct. 20, 2022, in Atlanta. (AP Photo/John Bazemore) 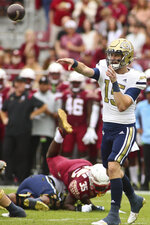 ATLANTA (AP) — Georgia Tech has lost two quarterbacks for the rest of the season with former starter Jeff Sims nursing a foot injury and No. 1 backup Zach Pyron out with a broken collarbone, interim coach Brent Key said Tuesday.

Sims, the team’s starter since 2020, will spend the rest of the season in treatment and will not be a part of team activities, Key said.

Sims dressed the last three weeks and was listed as available on an emergency basis but he didn’t take a snap when Pyron was injured and had to leave last week’s 35-14 home loss to Miami in the fourth quarter. Sims initially injured his foot in a loss Oct. 20 to Virginia.

“He’s frustrated he has an injury that’s preventing him from being full speed and allowing him to be part of the team,” Key said. “Just because on paper you medically can (play), every day you wake and feel a little bit different. The ability for him to go out and be the person he wants to be on the field didn’t present itself at the time.”

Zach Gibson, a transfer from Akron, will start when Georgia Tech (4-6, 3-4 Atlantic Coast Conference) visits No. 13 North Carolina (9-1, 6-0) on Saturday. Taisun Phommachanh, a transfer from Clemson, will serve as the primary backup. Phommachanh, who played in 13 games over three seasons as a backup with Clemson, has not taken a snap this year.

Pyron will have surgery on Thursday.

Gibson has completed 25 of 51 passes for 224 yards, one touchdown and two interceptions.

“We’ve got enough quarterbacks to be able to take a snap,” Key said, “and we’ll prepare all those guys to be able to play at their best on Saturday.”