Hawkeyes, Northwestern are both out to end losing streaks 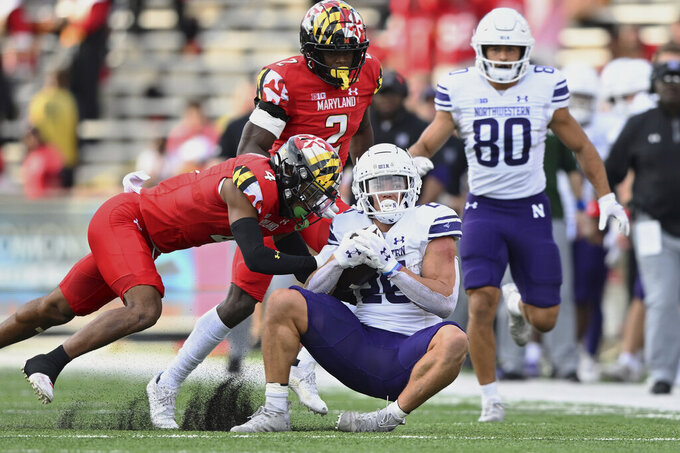 Northwestern running back Evan Hull is tackled by Maryland defensive back Tarheeb Still in the first half of an NCAA college football game, Saturday, Oct. 22, 2022, in College Park, Md. (AP Photo/Gail Burton)

Iowa's worst-in-the-nation offense has been low-hanging fruit for critics of coordinator Brian Ferentz after consecutive losses to Michigan, Illinois and Ohio State. Now they go against an opponent that's lost 12 of its last 13 games and given up at least 31 points in four of its last six games. If the offense can show a flicker of life, this is a game that could help the Hawkeyes stave off their first losing season since 2012.

Northwestern RB Evan Hull vs. Iowa defense. The versatile Hull is the Wildcats' most dependable offensive player. He can beat you running or catching the ball, and his 152.6 all-purpose yards per game rank second in the conference and sixth in the nation. Limiting him greatly enhances Iowa's chances of winning.

Northwestern: QB Brendan Sullivan made his first career start last week and all signs point to him getting the call against Iowa. Sullivan was 18 of 24 for 143 yards and a touchdown but he threw two interceptions in the second half.

Iowa: QBs Spencer Petras or Alex Padilla. Both practiced with the No. 1 offense this week, and the starter might not be revealed until pregame warmups. Petras has been ineffective, and Padilla hadn't taken a snap this season before he started the second half against Ohio State.

The visiting team has won four straight in the series. ... Iowa's three defensive touchdowns lead the Big Ten and are third nationally. ... Northwestern's 215 rushing yards against Maryland were its most against a Big Ten opponent since running for 411 against Illinois in 2020. ... Sam LaPorta became Iowa's all-time leader in receptions by a tight end (131) when he caught six balls for 55 yards against Ohio State. LaPorta's 1,462 receiving yards are third among Iowa tight ends.